Why StAC< History, Tradition and Values< Within the walls of Strowan House

Within the walls of Strowan House

Strowan House is a striking and familiar landmark shared by every single student who has passed through the St Andrew’s College gates. During its long history, the gracious homestead has borne witness to nearly all of the comings and goings at the College, and has fulfilled many purposes. 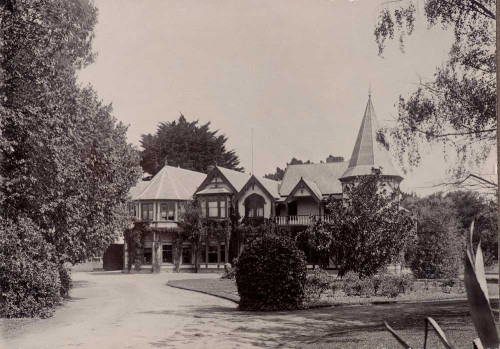 Before it became the jewel of the crown at St Andrew’s, Strowan House started life as a simple weatherboard farmhouse, built in the mid-19th century. Among its owners were a Victorian baronet, Scottish lawyer, and prominent Edwardian businessman, George Stead, who purchased Strowan in 1890, and transformed it into a grand gentleman’s residence, befitting his growing status in the Canterbury community.

It was thanks to a series of fortunate events, along with the determination of College founder, Rev. A T Thompson, that the St Andrew’s College Board was able to secure the purchase of the Strowan property from Stead in 1917. Rev. Thompson and his friend, Charles McCrostie, had been ‘wooing’ parishioners and gathering small donations. A generous £5000 bequeath from North Canterbury runholder, Duncan Rutherford, coincided with the Stead family putting their property ‘Strowan Park’ on the market. St Andrew’s College found its home.

The first major task for Rev. Thompson and the Board was to turn the palatial residence into an operable school, ready for the start of Term 1, 1918. A small army of tradespeople completed considerable works over the Christmas holidays, with Strowan’s 20 rooms transformed for use as staff and boarders’ accommodation and classrooms.

The highly decorative billiard room (currently the staffroom) became the Assembly Hall, and a room next door became the first classroom. The former drawing room (now the Rector’s Study) and another small room were also converted into classrooms. The boarders slept in dormitories which had been created upstairs and had their meals in the downstairs dining room. The first Rector, Sydney Dickinson, and his family lived behind the kitchen area, with the domestic staff overhead. The stables were transformed into the College’s first Science laboratory.

There were tough times throughout the College’s first year at Strowan, with World War I still raging in Europe, a rapidly growing roll putting pressure on classroom facilities, rudimentary dormitories for boarders providing barely adequate accommodation during a freezing winter, and the outbreak of Spanish flu.

The 1919 school year began with enrolments of 112 – six times more than St Andrew’s had started with in 1917. The accommodation crisis was solved by the construction of an additional classroom, and Dorm 6, an upstairs open-air boarders’ dormitory, which stretched along the west side of the building. A canvas blind was let down at night, providing scant protection from wind and rain. A further eight new rooms were added to house the Headmaster’s family and domestic staff. 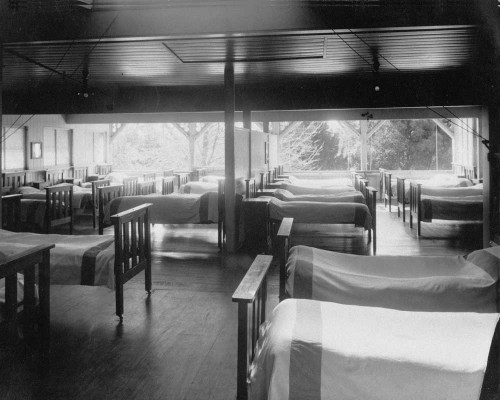 During the early decades of the College’s history, many boarders completed their schooling while living in Strowan House. It was their home, as well as their place of learning, alongside the day boys. By 1930, when many more buildings, including classrooms and boarding facilities had been established on campus, only the senior boarders remained living in Strowan House, many in the infamous Dorm 6.

Over time, additions to the house slowly changed its facade. Bits were added on, rooms were altered, walls removed, and internal corridors meandered through the spaces.

The Rectors and their families lived onsite in Strowan House until the late 1950s, when the College purchased a Rector’s residence in College Avenue. At this time many of the rooms in Strowan House were converted from classrooms back to reception rooms, meeting rooms, and offices.

Rector Christine Leighton has often reflected on the history of her office, the magnificent Rector’s Study, which was a drawing room when Strowan was a private residence, and has also served as a classroom, Library, and Boardroom at St Andrew’s College. She was delighted to hear the recollections of Old Collegian, Ray French (OC 1946), who spent much of his final year at the College in that very room, when it doubled as the Library and Upper Sixth Study. 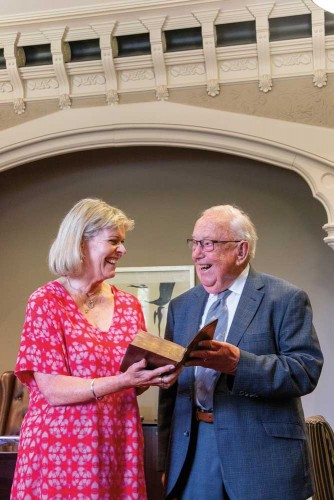 Rector Christine Leighton and Ray French (OC 1946) in the Rector’s Study, with The Complete Works of William Shakespeare, which was presented to former student and teacher, Henry Dowling (OC 1922) in 1930.

“There were only 12 of us in the Upper Sixth. The study was our classroom and the place where those of us who weren’t prefects, hung out. There was a little room off to the side where our lockers were, and we had an old table tennis table we used to play on,” says Ray.

The Library was also in the study, and consisted of glass cases hugging the walls, which were filled with books. “It was just after the war and I don’t think the College had a lot of money to spend on the Library. We had quite old books, mostly classics. The Upper Sixth boys were also the Library Committee, and we used to take turns looking after it, opening for half an hour at lunchtimes. In our last year in 1946, we re-catalogued the whole Library.” 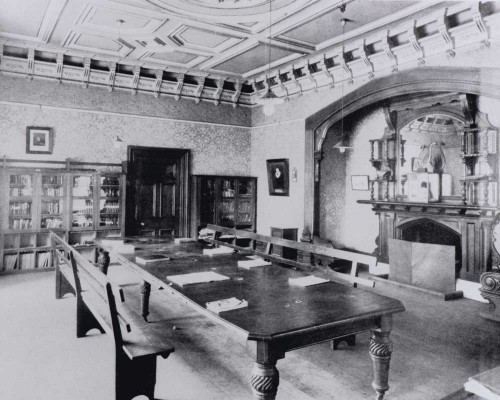 The Rector’s Study when it was the College Library and Upper Sixth Study.

Ray has fond memories of lessons in the study, particularly as one of Mrs Pocock’s Upper Sixth ‘History boys’, and learning English, French and Geography from Henry Dowling, known to all as ‘Mr Chips’. “It was a good last year because the war had finished, and everyone had an optimistic feel about the future.”

St Andrew’s College without Strowan House is an unimaginable thought, however, there was a risk she could have been lost forever during the Canterbury earthquakes. The building was extensively damaged in the September 2010 earthquake, which worsened during the major aftershocks of 2011. As a result, the building underwent a significant 18-month restoration to bring it up to today’s engineering and safety standards. It was a very complex process, given the 25-room building was in fact in five separate structures, each built in different periods and requiring specific structural solutions. Included in the works was the removal of the original lath and plaster walls, which were replaced with braced plywood, and the painstaking restoration of Strowan’s ornate plasterwork and stained-glass panels.

Following the restoration, Strowan House is once again a busy hub for the Rector, Senior Management, teachers, various administrative and support teams, and of course the boarders. They are well catered for in the character-filled dining room, which also remains the venue for many events and traditional celebrations at the College.

The ‘grand lady’ is back to her brilliant best and continues to play a hugely important role at St Andrew’s College. Within her walls is contained incredible history, memories of staff and students from across the generations, and likely a great many secrets. And with her stronger and brighter than ever, Strowan House is poised to remain the College’s most significant building for another 100 years. 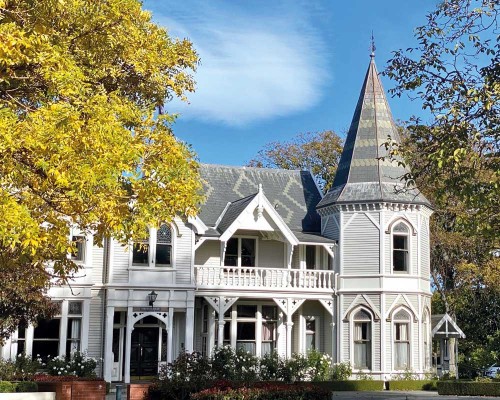