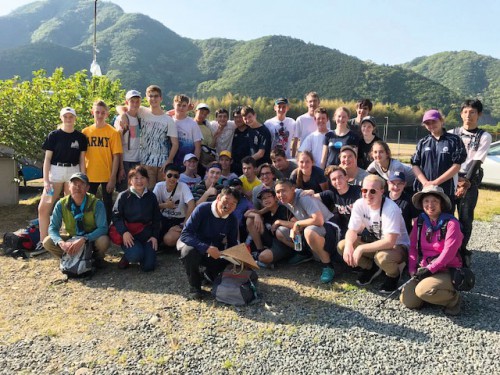 A homestay with local families in the small rural Japanese village of Ago in Wakayama-ken, was a highlight of the 18-day Japanese Languages trip in April. “Our students were hosted in groups of four and experienced how Japanese people really live. At each home they enjoyed lots of delicious food and different activities, such as dressing in kimono, wearing traditional armour, cooking, and carrying out farm duties. We also came together as a group to help the villagers lay out rice-planting trays. The pace of village life was such a contrast to the big cities of Tokyo and Kyoto, and the local families made us so welcome,” says Japanese teacher, Virginia Simcock.

During the visit the students gained an insight into some of the challenges facing small villages such as Ago, with many of its young people moving away to big cities.

Thirty-three Year 11–13 students, who had been learning Japanese for three to five years, went on the trip accompanied by Virginia, English teacher Donna Jones and Spanish teacher Alexis Evlampieff. “The students enjoyed practising their Japanese in a real life context. In groups of two or three they would often think about how to say something and interact, which helped to grow their language confidence. It was also wonderful for them to visit the cities and sights they had been learning about in class, eat the local food and experience the different way of life and culture of this amazing country.”

A visit to the Hiroshima Peace Museum was another highlight, which moved many of the students, says Virginia. “Seeing the photographs and listening to the stories of survivors was an emotional experience for them.”

During the trip, the group met up with six former St Andrew’s students, who are currently living in Japan. “Meeting the Old Collegians and hearing about their work or study in Japan was a buzz for the students and really opened their minds to future possibilities of pursuing the language. A number have already told me they want to go back to Japan.”

Virginia says learning Japanese gives students language skills and cultural awareness they can take into many areas of their lives. “One of the aims of Languages courses is to grow global citizens who have tolerance, understanding, and who embrace the opportunity to interact with other cultures.”

A homestay with local families in the small rural Japanese village of Ago in Wakayama-ken, was a highlight of the 18-day Japanese Languages trip in April.