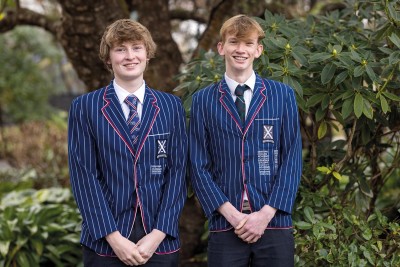 Two students submitted pieces for the New Zealand National Flash Fiction Day competition, with Samuel Brophy (Year 10) making the shortlist in the youth section with his story, Closed Curtains. This is an incredible achievement in this international youth writing competition. Ewan Hamer (Year 12) was also longlisted in the youth section for his story, Bird’s Eye View.

Luke Wylie (Year 12) and Tom Edwards (Year 13) won the Canterbury Schools’ Impromptu Debating Tournament, beating Christ’s College in the final. This is the second title that Luke has won this year and Tom’s second time winning this tournament, which he won with Oscar Bloom (OC 2021) last year. Luke and Tom also represented Canterbury at the New Zealand Schools’ Debating Championships, where Tom earned a Highly Commended award, placing him in the top 10 nationally, an incredible achievement given the hundreds of students around the country who competed at regional tournaments.

A group of 17 Year 12 students were invited to attend the Emerging Leaders Conference held at Christ’s College. Around 600 students from various schools listened to inspiring speakers, including Abbas Nazari, a former refugee who escaped the Taliban in Afghanistan and sought asylum in New Zealand, and four-time Olympian, Emily Seebohm. The students also attended workshops and took part in a student panel.

Matthew Patterson (Year 13) represented Canterbury in the national Enterprise in Action competition in Wellington. He is the CEO of Step on Me, which has designed a device that will help prevent the spread of germs in offices and homes. His team was second in the first challenge and won the second challenge, for which he has received a $4000 scholarship to Massey University.

Tom Edwards is having an amazing year of outstanding achievement. After writing an ethical case for the 2023 Australasian Ethics Olympiad, titled The Fifth Industrial Revolution, he was named as the Ethics Centre Grand Prize Winner. Along with being awarded the top prize, Tom received a monetary award of $AUD250. Tom was also part of the St Andrew’s team, which finished on top of the world in the International Mathematical Modeling Challenge (IM2C), winning an Outstanding Team Award alongside just two other school teams in the world. Read the full story about this incredible achievement on page 13.

Katherine Simcock (Year 10) was one of three students from across Canterbury invited to speak at the Speaking 4 the Planet event at Tūranga, Christchurch. Katherine entered the Spoken Word category and spoke about human impact on climate change.

The St Andrew’s alliance of Alexander Harbrow and William MacIntyre (both Year 9) in team StAC 1, and Owen Menzies, Emily Morgan, Flynn Blackler, William Couper, and Bryan Cooper (all Year 11) from team StAC 4, won the final at the VEX Robotics Canterbury Challenge Championships, making them the overall Canterbury champions for this year. Year 11 Mathematics Casio Calculator Competition St Andrew’s was represented in the group and individual sections at the Year 11 Mathematics Casio Calculator Competition by Aaron Moore, Bryan Cooper, Chantelle Xiong and James Hart. St Andrew’s finished in second place in the group section, with Bryan Cooper winning the individual section, and a new calculator, after securing a one-point victory.

A group of Young Enterprise Scheme (YES) teams from the Year 13 Business Studies classes competed in the Business Plan pitch competitions, judged by local entrepreneurs in a Dragon’s Den format. The top three teams were ZoeJasmine Designs (hand-crafted jewellery), Restoration Products (restored farm machinery) and Student Art Initiative (a website distributing student art).Matthew Patterson (Year 13) was selected to represent Canterbury in the Entrepreneurs in Action (EIA) 2022 event run by Young Enterprise at the beginning of July. EIA is an annual event where 60 of the country’s most engaged Young Enterprise Scheme (YES) students come together to compete in two back-to-back business challenges over 48 hours. Throughout the three days, students were split into teams and mentored by host companies such as Spark and Xero to compete in the two business challenges.

We highlight the most recent Academic Successes of our students.