Adele Sherborne (Year 8) was selected from nearly 150 entries as one of the winning mural designs in this year’s Re:ACTIVATE Aspiring Artist competition. The judges were impressed with how Adele’s work responded to the brief with engaging ideas and outstanding visual concepts.

Battle of the Bands

After winning two heats and putting in an incredible performance at the Christchurch finals for Battle of the Bands, rock band, Black Wired, comprising Chantelle Xiong, Tamaroa Connelly, Hayden Lam (all Year 11), Sam McAlister (Year 10), and Ethan Lam (Year 9) won a coveted spot in the national finals of the 2022 Battle of the Bands. The final was split into a two-day event, with Black Wired performing at the second event, held in Auckland in early October. This is an adult competition, so the band were by far the youngest performers. They delivered a stellar 25-minute set of original material, and more than held their own against the other bands while performing at Auckland’s Anthology Lounge. 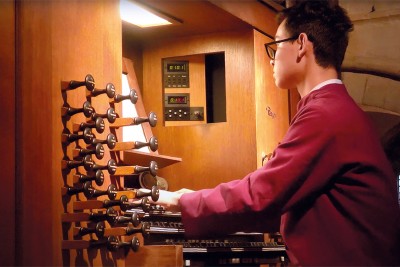 Sea-am Thompson (Year 11) was one of two choral musicians from the Christchurch Cathedral Choir invited by Dr John Linker of the Christchurch Transitional Cathedral to travel to sing at Christ Church, Oxford, United Kingdom in the October school holidays. During the three-week stay in Oxford, Sea-am sang in 15 services. He visited 15 Colleges and their chapels around Oxford, and the ancient Oxford Town Hall, where he was allowed to play their organ from the 1800s.

Stacchorus performed at Encore, an independent schools’ choral festival, held at Christ’s College. A waiata was sung by all students, followed by two performances by each school, and two combined items. It was a great night of choral music making.

Three short films made by Year 12 Media students have been named as Top 10 finalists for the 2022 New Zealand Regionals Competition of the International Youth Silent Film Festival. They are:

With the cancellation of the 2022 Southern Jam Jazz Festival, the jazz bands did their own tour to Nelson instead. They played at six primary schools presenting an engaging, informative and fun 40-minute programme. The concerts were presented by Xanthe Pearce, Tamaroa Connelly and Jack Flanagan (all Year 11) and featured the Big Band, the Soul Band, and the Jazz Orchestra playing well-known songs from movies and jazz repertoire. The bands also performed to a full house at The Honest Lawyer in Nelson and the Golden Bear at the Mapua Wharf, supported by bands from Waimea College and Nayland College. The day after their return from Nelson they held their annual Jazz Club at Fat Eddie’s in central Christchurch, performing a two-hour programme for friends and family in a full venue.

Three St Andrew’s College jazz groups performed in the Ara JazzQuest. The Soul Band won a gold award, the Big Band silver, and the Jazz Orchestra a bronze. The jazz bands are very young this year and have made superb progress. The judge made special mention of the Soul Band and the vocals of Estée Wilke and Cindy Xiong (both Year 13), saying the feeling in the room during their performance was ‘electric’.

Patrick Jarman (Year 3) was cast in Macbeth for the New Zealand Opera.

Pipers Lucas Paterson (Year 11) and Tayla Eagle (Year 10) and drummers Rachel Holyoake (Year 13) and Georgia Eagle (Year 12) took part in the New Zealand Youth Pipe Band tour to Southland. The band performed in Queenstown before moving on to Invercargill to join the ILT City of Invercargill Pipe Band for their 125th anniversary, taking part in a spectacular concert.

This competition is a major drumming event on the calendar, attended by drummers from other parts of New Zealand. First placegetters were:

The Pipe Band completed an outstanding Labour Weekend Silver Chanter competition, which was based at the College. Bagpipers from around the country travelled to Christchurch to compete in the biggest solo piping competition in the New Zealand calendar, with New Zealand Championship events and a fantastic prize pool featuring our pipers throughout. Top three placegetters were:

Four St Andrew’s students were announced as finalists for the Play It Strange Lion Foundation Songwriting Competition for their incredible songs, with two students achieving national placings. Grace Lawrence (Year 13) was the overall competition winner for her stunning coming-of age song, Differently Now. Cindy Xiong (Year 13) was runner-up of the David Richwhite Lyric Award for her song Colourblind. Other finalists from St Andrew’s were Chantelle Xiong and Christine Jeon (both Year 11) for their song Reminisce. All songs will be produced professionally, and will feature on the 2022 Play It Strange album. 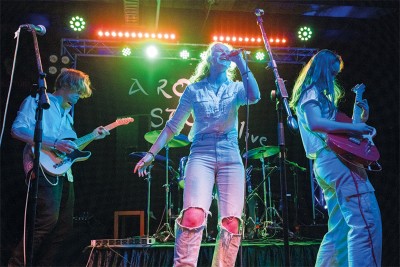 The inaugural StAC Rock Night was held at A Rolling Stone on Colombo Street, and was a valuable opportunity for all 10 Secondary School rock bands to perform in a ‘blues bar’ style venue and gain experience performing in front of an audience. The bands were well supported by over 200 friends, family, and the general public, along with their rock school tutors, Michael Sumner and Sam Kealty, who have done great work with the bands throughout the year.

The following students won medals and trophies, or special prizes:

Aaron Yu and Ben McKendry (both Year 5) won the scholarships for the 8–10 and 10–12 years age groups respectively. Aaron also won the prize for the Best Performer U12 Years.

Cindy Xiong (Year 13) won the National Young Performer competition in Speech and Drama, as the nominee from the Christchurch Competitions Society. Cindy had to perform a 15-minute programme of poem, prose and drama based on a theme, and an improvised scene with just 30 seconds of preparation time. Cindy held off some tough competition, including students studying Drama at university, to win the $5000 first place.

Five choirs from the College and Preparatory School performed along with two barbershops, many soloists, and some staff items at the annual Vocal Concert. It was a great celebration of vocal music and appreciated by an enthusiastic audience.

We highlight the most recent Cultural Successes of our students.