Former and current members of the St Andrew’s College Pipe Band and their supporters came from near and far, including the United Kingdom, to celebrate 100 years since the band’s formation in 1919 and to mark the significant place it holds in the history of St Andrew’s College.

When Ben Murray (OC 2013), former Pipe Major of the St Andrew’s College Pipe Band when it won the World Championships in 2013, stood to give the traditional Founders’ Day Address on Friday 15 March, he couldn’t have imagined how relevant his words would be just a few hours later.

In his moving address, Ben touched on his excitement of being part of a hugely successful Pipe Band but said what stuck with him now is the inclusiveness of the Pipe Band community at St Andrew’s, and the relationships he formed. “One of the most beautiful things about the Pipe Band as a whole is its ability to connect and foster a community that disregards age, racial background, or even skill level. There is an all-encompassing sense of engagement and belonging, no matter where in the world you might be from, how old you are, or how long you’ve been a part of it. We are incredibly lucky.”

Ben also talked about mental health, and how communities such as the Pipe Band serve as a great example of how we can look after one another and ourselves through shared experience. “The Pipe Band set me up with a community of people I will be with for the rest of my life, both within and outside the College, and has taught me so much about the importance of relationships aiding mental health.”

Soon after the assembly, the tragic terrorist attack in Christchurch occurred, which saw plans quickly revised for the Centenary celebrations. The strength of the Pipe Band community was never in doubt, as they respectfully honoured those who had fallen, and like so many Pipe Band members before them, played on in difficult circumstances. 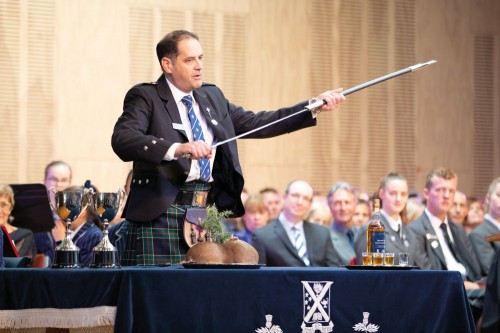 The Founders’ Day Assembly was a wonderful occasion to start the Centenary celebrations. Rector Christine Leighton welcomed the more than 400 pipers, drummers, and supporters past and present set to gather at the College over the two day celebration, to reminisce and honour the ‘dedicated, selfless, passionate, and determined people’, who have given so much to the St Andrew’s College Pipe Band community. “Most students of St Andrew’s College, by the time they finish their schooling, have come to recognise the importance of the Pipe Band. They admire the commitment, discipline, musicality, and talent of those who learn the pipes and drums, and who perform and compete at so many occasions throughout each year. Today St Andrew’s College has over 130 students learning the pipes and drums, joining an impressive number of Old Collegians who have been part of the St Andrew’s College Pipe Band family.”

Christine said the Centenary also honoured the Scottish foundations of the College. “Who would have thought that a plea from a few boys in 1919 to have a Pipe Band at St Andrew’s College would have produced this connected, passionate, and loyal Pipe Band community. It is truly something to celebrate.”

The current Pipe Band was involved in many aspects of the Founders’ Day Assembly, including piping in the staff, and playing the medley which won them second place at the Pipe Band World Championships in Scotland last year. Solo piper, Campbell Wilson (Year 12), piped in the haggis for the traditional Address to the Haggis by Old Collegians Association President, Jonathan Wells (OC 1987), and Pipe Major, Noah Clarke, piped the newly announced Robert Burns Scottish Scholarship winners, Omri Kepes and Emily Tyrrell (both Year 12), off the stage. Omri and Emily will travel to Scotland later this year, visiting several schools, along with places relating to Scottish poet, Robert Burns.

A number of sporting and special awards were given out, with Old Collegians Association President, Jonathan Wells, presenting the Henry Dowling Memorial French Award to Juliette Newman (Year 13), and the G.A.M. Hilson Memorial Accounting/Economics Award to Shannon Fraser (Year 13).

Other highlights of the assembly included a reading by Heads of College, Juliette Newman and Luca Vinnell, a prayer by College Chaplain Paul Morrow, a musical item by Staccoro, singing The Water is Wide, the Orchestra’s performance of Waltz from Swan Lake, and Iona Taylor (Year 13), singing Ye Banks and Braes O’ Bonnie Doon.

Following the assembly, guests enjoyed a luncheon, before meeting at the Quad for the Highland Games. Sadly, this was only just getting underway when the College went into lockdown due to the terror attack in Christchurch. Pipe Band Director, Richard Hawke, and the Pipe Band guests on campus spent the afternoon in Strowan House. “The positive to come out of these sad and unexpected events was that we were all in one place and were able to informally mix and socialise,” he says.

The decision was made to call off the Friday night Concert and Cocktail Evening, with a revised programme put in place for the Saturday Centenary events. 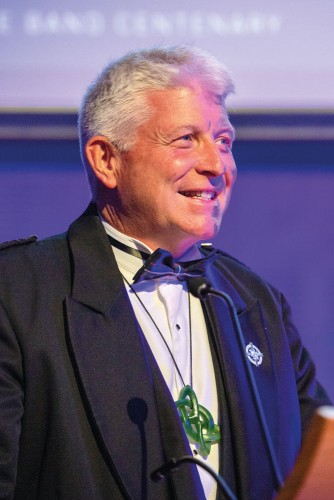 The exceptional professionalism and commitment of Pipe Band Director, Richard Hawke, was honoured at the Founders’ Day Assembly, when he was presented with a special pounamu taonga, by Rector Christine Leighton, to symbolise the appreciation and gratitude from the St Andrew’s College community for all he has done. Richard’s own piping talent is well known. He is considered one of the world’s greatest competitive solo pipers, winning many prestigious international titles, and over 20 New Zealand solo piping championships. In 2011, Richard received a New Zealand Order of Merit for Services to Pipe Bands after a career in piping spanning over 30 years. Richard’s wife Julie runs the Julie Hawke School of Highland Dancing at St Andrew’s, and their three sons, Jamie (OC 2006), Harry (OC 2009) and Angus (OC 2011), have all been Pipe Majors of the St Andrew’s College Pipe Band.

The downstairs area in the Senior College was the first port of call for all visitors to the Pipe Band Centenary celebrations. Along with the ‘Pipe Band hub’ being a place for guests to register and collect their registration packs, there were decade boards on display, which had been created by Preparatory School Art teacher and College Archivist, Pip Dinsenbacher and Head Graphic Designer, Craig Morgan, from the Communications Department. As they viewed the boards, guests enjoyed finding themselves and their friends in the photographs and reliving some wonderful memories from the past. Attendees also received stunning Centenary Pipe Band badges, specially made for the celebrations, and a wonderful Pipe Band history book, The Road to Success, written by Pip Dinsenbacher.

Rolling footage of the Pipe Band, going as far back as the 1930s, was also on display. The footage was put together by former Head of Media, Simon Williams and the Media Department, and made for popular viewing. Floral displays by President of the Ladies' Circle, Val Wells, created a wonderful ambience, enjoyed by all who visited the hub.

Former and current members of the St Andrew’s College Pipe Band came from near and far to celebrate 100 years since the band’s formation.