Why StAC< Latest News< Pipe Band runners up at the Worlds

Pipe Band runners up at the Worlds 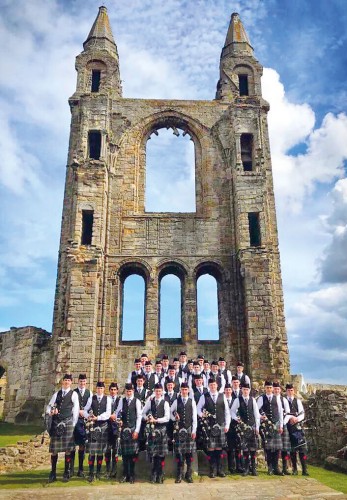 The College’s Pipe Band Director, Richard Hawke, says it was a “brilliant” result for the 27 current students and three 2017 leavers who made up the band, which included 10 girls, the largest contingent St Andrew’s has ever taken to the championships. “The Worlds provide the ultimate test of the skill and ability of our pipers and drummers and the band’s performance was absolutely first class. I don’t think they could have done better.”

Richard says the result was even more impressive given the band faced two significant challenges. “Going from a Christchurch winter into a Scottish summer is a dramatic change for the instruments. We were also coming out of the New Zealand off-season and hadn’t competed since winning the Nationals in March. Our only competitive practice was playing in a couple of smaller competitions in Scotland the week before the Worlds, when we faced teams which had been competing solidly for three months.”

He was delighted when one of the four judges at the Worlds put St Andrew’s in the top spot. “It was a major thrill, which showed we were more than competitive. Congratulations goes to Dollar Academy, a Scottish co-ed school, which won the title.”

Over 8000 pipers and drummers in 214 bands from 13 countries competed at the event, which was celebrating its 70th anniversary this year. This is the fifth time St Andrew’s has competed at the Worlds since 2007, with the College taking the Juvenile title in 2013. The students travelled to Scotland with 50 parents and supporters, with Rector Christine Leighton also joining them for the competition. “We are all incredibly proud of what the band has achieved. The competition at the Worlds is intense and the standard was unbelievably high in the Juvenile grade. The band continues to go from strength to strength under the leadership of Richard Hawke, and has had another extraordinary year,” she said.

Other highlights of the tour included playing at the North Berwick Highland Games and the town of St Andrews, and attending the Edinburgh Military Tattoo. Pipe Major Louis Newman (Year 13) competed in a Pipe Idol competition for young pipers, while Drum Sergeant Patrick Moran (Year 13) participated in the Drumming for Drinks exhibition and competition. The St Andrew’s contingent was delighted to see Old Collegian, Alexandra Wilson (2016) win the Tenor Drumming section at Drumming for Drinks.

The Pipe Band achieved a rousing welcome back at Christchurch International Airport from Senior Management and the First XV, which performed an incredible haka.