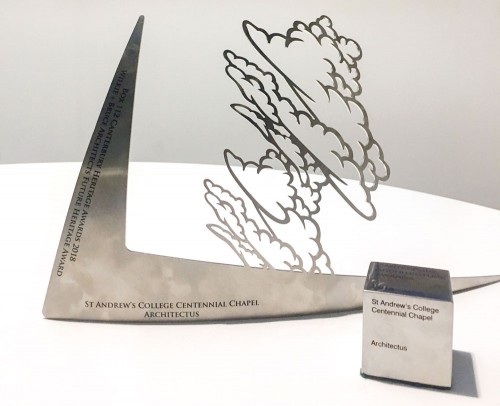 “An exemplary response to a challenging brief,” was a comment from the jury at the 2018 Canterbury Architecture Awards, when presenting Architectus with a Public Architecture Award for its stunning design of the Centennial Chapel at St Andrew’s College.

“The new Centennial Chapel houses special spaces and treasured elements, and is respectful of past Collegians. Against a backdrop of so much lost heritage, St Andrew’s College Centennial Chapel celebrates the richness of memory that only time can shape and resets it as part of a 40m long brick ‘Memorial Wall’. The roof, a series of folded ridges and valleys, is a powerful sculptural element reminiscent of early church buildings yet contemporary in execution,” the jury said.

Rector Christine Leighton, General Manager David Evans, and Chaplain Paul Morrow attended the awards at the Transitional Cathedral on Thursday 7 June, with Jane Rooney and Carsten Auer from Architectus, and Mark Blyth and Craig Greene from main contractors Armitage Williams, who brought the magnificent design to life. “It was wonderful for the Centennial Chapel to be recognised in professional circles, for its design and balancing the careful integration of historic artefacts into a modern building. We were also delighted that the late Alun Wilkie, of Wilkie and Bruce, who designed so many buildings on the campus at St Andrew’s, was honoured with a Public Architecture Award for The Piano,” says David Evans.

Just over a week later, on Friday 15 June, the Centennial Chapel was recognised again, winning the prestigious Future Heritage Award at the 2018 Canterbury Heritage Awards at the Isaac Theatre Royal.

The aim of these awards is to promote excellence in heritage retention and conservation, as well as encouraging heritage tourism and education.

Rector Christine Leighton along with Jane Rooney and Carsten Auer from Architectus, and Renee Brook from Holmes Consulting were in attendance. 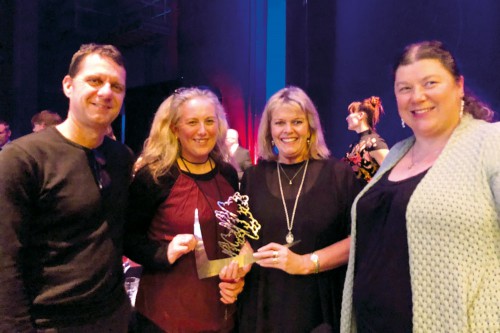 The jury at these awards said: “The new Centennial Chapel is a place of contemplation and worship, and of gathering, its feet steeped in history on the public side and its gaze facing the future, over the stream and playing fields to the College and its ever-changing student role. Three strong elements – the brick ‘Memorial Wall’, the folded glass wall, and the complex gable roof soaring above – come together to define a marvellous interior space that will serve and inspire many generations to come.”

David Evans says these awards ensure that the Centennial Chapel will be a notable building well into the future. “We are absolutely delighted it has received this recognition.”

Since these awards, the Centennial Chapel has also been named as one of seven finalists in the Public Architecture category at the New Zealand Architecture Awards. Winners will be announced in November.

“An exemplary response to a challenging brief,” was a comment from the jury at the 2018 Canterbury Architecture Awards.