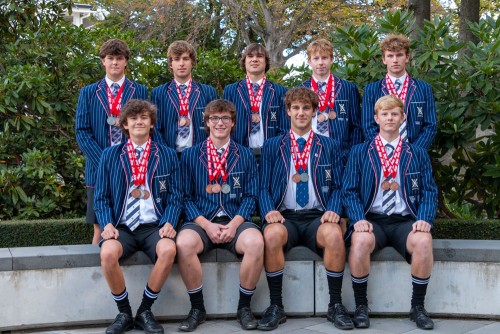 Five of the boys, Caleb Brown, James McLaren, Dylan Smith, Sam Long, and cox, Alexander Carrodus, had already won silver in the Springbok Shield (Boys’ U18 coxed four), which is another premier event at the regatta. In a thrilling finish they were just beaten by Auckland Grammar School. The boys also won a gold medal for being the top South Island school in the same race.

Georgia Thomson (Y12) also had an outstanding regatta, winning the only gold medal for St Andrew’s College, in the Girls’ U16 single sculls. She rowed with determination throughout the week and was justly rewarded after a fantastic row in the final.

The squad of 42 students made it through to an impressive 13 A finals, which was the second equal highest number achieved by any school. This achievement was made even more special, when considering the finals were across every age group, in both boys’ and girls’ events.

With so many medal winning Maadi Cup rowers still in Year 12, the future bodes extremely well for the rowing programme in 2022.

Teacher in Charge of rowing, Liam Smith, said Guy Williams and the rest of the coaching team did a fantastic job of preparing the students to perform at a level that exceeded their expectations. “ We also want to thank parents and family who have supported the students at regattas and camps throughout the year, along with Heidi Koning, Liz Gormack, Hamish Bell and Evert van Florenstein for their support.”