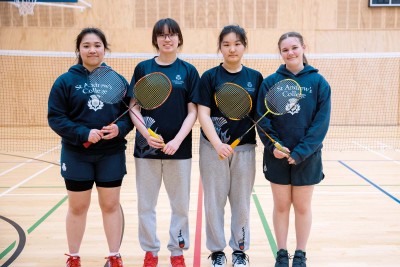 The Senior A netball, and Senior A Boys’ basketball teams came within a whisker of the same result, both finishing in second place after tense finals. The highly anticipated netball final against St Margaret’s College went down to the wire, with St Margaret’s just holding on 32–30. The Senior A Boys’ also did extremely well, to finish within four points of favourites Christ’s College.

Many other St Andrew’s teams across various codes and age groups also won their finals – Girls’ U15, Boys’ U15, and Boys’ U17 White basketball teams, Girls’ 2nd XI football, Girls’ B badminton, the Senior B, Year 10A, Year 10B and Year 9C netball teams, and the U15 Open and U16 U65kg rugby teams.

The Premier Girls’ badminton team won their grade after convincingly beating St Margaret’s College 7–2 in the final. The girls played consistently well throughout the season, with Yirui (Elly) Li (Y11) and Ashley Bonne (Y9), winning every singles game they played. 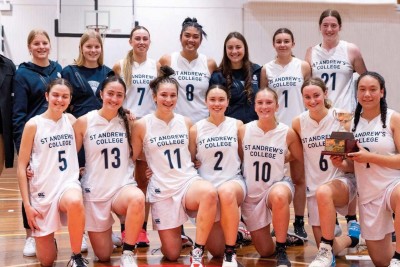 The Senior A Girls’ basketball team was delighted to win the Canterbury Whelan Trophy final. They went into the final against Rangiora High School undefeated and got off to a strong start. However Rangiora pulled slightly ahead in the second quarter. The teams were neck and neck in the third quarter, until a strong performance by the St Andrew’s girls in the final quarter saw them come home with a 70–53 victory. Team captain, Te Rina Cooper (Y13), was rewarded for her fine effort by being named the final’s Most Valuable Player.

The Senior A Boys’ basketball team took on heavy favourites Christ’s College in the final of the Thomson Trophy. Christ’s College was unbeaten all season, however the St Andrew’s boys were right in it, and only down one point with three minutes to go. Some solid free-throw shooting and a few missed opportunities late in the game saw Christ’s College take out a narrow 88–92 victory. 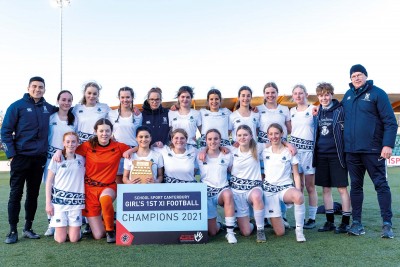 It was a great year for Girls’ football, with both the 1st XI and 2nd XI teams winning their respective grades. The 1st XI were in dominant form in their final against Rangi Ruru Girls’ School, easily winning the match 5–0. The 2nd XI had a much closer battle against Avonside Girls’ High School, and won the match following an exciting penalty shoot-out. 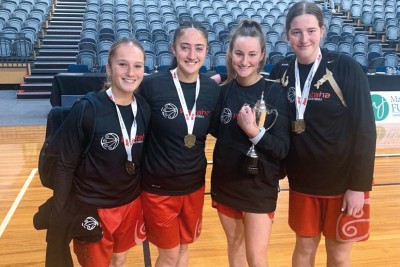 Lauren Whittaker (Y11) participated in the NZNBL competition as a member of the Auckland Dream. She was the only school-age student from the Canterbury region participating in New Zealand’s professional women’s league.

Grace Cameron (Y13), Madeline-Rose Morrow, Karereatua Williams (both Y12) and Molly-Belle Morrow (Y10) were awarded sponsored scholarships from the Alloyfold Canterbury Wildcats and will also be mentored for the season by a current Wildcat player. 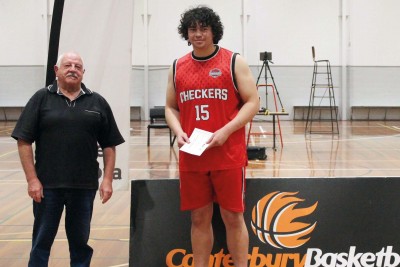 At the CPSSA Basketball Tournament, the Preparatory School Girls’ A basketball team finished fourth, and the Girls’ Years 5–6 team was third.

Sasha McIntyre and Ella Buchanan (both Y8) were selected for the U13 Canterbury Basketball Regional Development Programme.

Senior A Boys’ basketball coach, Aled Jones, and starting forward, Benjamin Freeman (Y13), were in the Checkers team which beat Atami in the Canterbury Men’s Premier Final. Benjamin was the top scorer with 30 points and seven rebounds and was named the final’s Most Valuable Player. He is the only schoolboy in recent memory to be awarded this prestigious accolade.

A group of 14 St Andrew’s College students from Years 10–13 were involved in the FIBA 3×3 ‘Seven Stars’ tournaments run by Basketball New Zealand. The final iteration of the women’s tournament was won by a team including Madeline-Rose Morrow, Karereatua Williams (both Y12) and Lauren Whittaker (Y11).

Madeline-Rose Morrow (Y12) was selected to participate in the 2021 Basketball New Zealand December National Camp in Auckland, which will serve as preparation for the U19 National team which will compete for the FIBA U18 Asia Championships scheduled to take place in 2022. 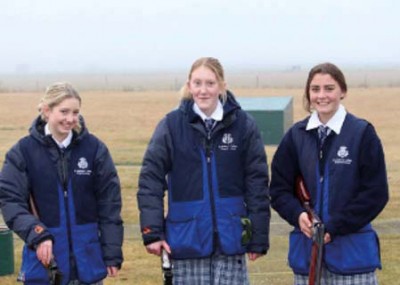 A strong team of 19 students competed at the seventh event in the Canterbury Secondary Schools’ Clay Target circuit at Mead Te-Pirita Gun Club. As well as winning two firsts and a second in the Junior competition, Logan Gardner (Y10) had a shoot-off against two seniors for Highest Overall Shooter.

Those to place were:

Andrew Greig (Y11) competed at the Otago Provincial Championships where he won the B Grade and Junior Single Rise Championships, with the only possible (25/25) in that grade or category on the day. 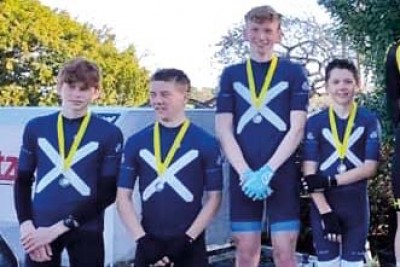 As the South Island Schools’ Road Cycling Championships were cancelled due to the lockdown, Cycling New Zealand arranged an online virtual championship using the Zwift software. This enabled students to set their bikes up on a smart trainer at home and log into the races on their computers to compete against other students of their age group. William Crawford (Y8) competed in the U14 Boys’ grade and was second in General Classification (overall position of the three events), and third in the hill climb and criterium events.

At the South Island Mounted Games Tournament Gemma Lewis (Y11) and Georgia Lewis (Y8) were second in the A Grade final, and Annabel Glass (Y9) and her partner Bridget Glass were fourth in the C Grade final.

The St Andrew’s Equestrian A team was second overall at the Canterbury Schools’ Dressage Championships. Individual placings were:

Kiara Bercelli, Charlotte Roche (both Y12), and Megan Simpson (Y10) were named in the Canterbury Pride Football team, which is the Senior Women’s team that plays in the national league.

Cameron Slee (Y13) and Hugh Nixon (Y12) were selected for the National U18 Hockey Training Squad. Unfortunately, due to travel restrictions, the Junior Black Sticks have not been able to play a competitive international game for a few years, so selection into this training squad is the highest honour for this age group of hockey players. 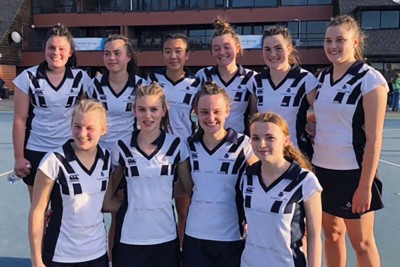 At the South Island Secondary Schools’ Junior Netball Tournament, the St Andrew’s Year 10A team was unbeaten in their pool games, won their semi-final 42–18 against Waimea College, and was narrowly beaten in the final 25–30 by Cashmere High School to finish second overall.

Six players from the Senior A netball team were chosen to compete at the Netball New Zealand U18 Championships in two participating centre teams.

Tom Turner (Y12) was selected for the highly-contested New Zealand Schools’ Polo team, which will play Australia in two matches at the end of November and early December. This is a major achievement for Tom, who is the youngest in the team.

Kalisa Zhang (Y6) represented Canterbury at the 2021 New Zealand Gymnastics National Championships held during the holidays, where she won silver for the Hoop event.

At the South Island Secondary Schools’ Rogaine Championships, Matthew Hirschfeld and Ethan Griffin (both Y9) won first place in the U14 Boys’ event, and the team of Alice Egan (Y13), Lucy Hamilton and Jenna Hirschfeld (both Y12) were second in the U19 Girls’ event.

Emma Inglis, Thomas Forsey (both Y13), Georgia Thomson (Y12) and William Tavendale (Y10) were selected for the Canterbury U20 rowing team to compete at the Mainland Interprovincial Championships.

Thomas Forsey, Emma Inglis (both Y13), Georgia Thomson (Y12) and William Tavendale (Y10) were in the Canterbury team which won the Mainland Inter-provincial Championships. Thomas coxed the winning Men’s Open 8+ and Emma placed third in the Women’s U20 4X-. 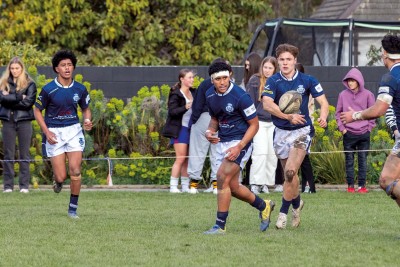 D’Angelo (Lino) Tauti, Torian Barnes and Will Stodart (all Y13) were named in the 2021 Junior Crusaders Camp. Thomas Sexton (Y13) was named as a standby player. Torian and Will later played in the Crusader Junior XV final against the Highlanders U18 team.

Jack Harding (Y13) was selected for the University of Waikato Chiefs Region U18 Development Camp. He will head to the Waikato to study and be part of an exciting Chiefs Rugby Academy programme in 2022.

Isaiah Armstrong-Ravula (Y13) was named co-captain of the Hurricanes U18 rugby team, which played Manawatu U19.

Ashleigh Brett (Y13) was selected for the Canterbury U19 rugby team and has been training with the Senior Women’s Canterbury Development Squad. She was also selected as a member of the National U18 Māori Rugby Development Camp.

At the National Junior Ski Championships, sisters Isabelle (Y4), Alessandria (Y2) and Francesca Greer (Y1) were second in the Years 1–4 team race, representing St Andrew’s. Alessandria also placed first in the U8 Dual Slalom and was selected for the Queenstown Alpine Ski Team.

In the Remarkables Interfield races on Saturday 18 September as part of the South Island Secondary Schools’ Snowsport Championships, Holly Thomas (Y10) was first in the U16 Girls’ event, and Nilo Labbe Hubbard (Y10) was second in the U16 Boys’ event. The following day, the Mixed ski team placed first, the Boys’ ski team second, and the Boys’ slopestyle team second. Thomas McKendry (Y11) was the fastest boy and Holly Thomas (Y10) was the fastest girl in the competition. The Boys’ snowboard team placed second. 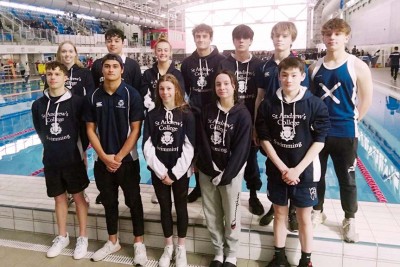 A team of 12 St Andrew’s College swimmers competed at the New Zealand Secondary Schools’ National Swimming Championships against 730 swimmers from across 167 schools. They did incredibly well to win a total of 14 medals, including relays. The highlight of the meet was Taiko Torepe-Ormsby (Y13) breaking a 13-year-old record in the Men’s 50m freestyle event.

At the North Island Championships, Jono Baynon (Y12) hit an incredible 183 targets without missing to win the Single Rise and Points Score. He achieved a ‘Long Run’ of 352 targets altogether, which is an outstanding achievement. Maggie Hood (Y11) was third in Ladies’ Points Score. At the national championships, Maggie was third in Single Barrel. She teamed up with Sam Kinney (Y12) to win the two-person Skeet Team event. Connor Higgs (Y11) and William Long (Y10) were third in this event.

Pippa Henderson (Y12) and Tineke Hinton (Y11) were named in the New Zealand U19 Junior Women’s Volleyball squad, from which a team will be selected to play in the Asian Championships to be held in 2022. 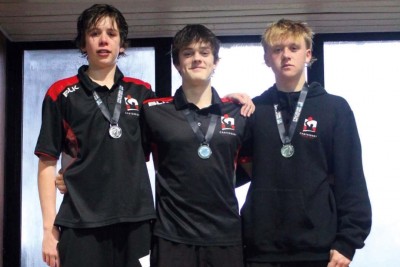 Congratulations to Blake Richards (Y13 – water polo) who was the winner of Category Two – Contribution to Sports Administration, and Alexander Carrodus (Y13 – rowing) who received a Highly Commended in Category One – Most Valued Contribution to a team, at the Zonta Sports Awards. Other finalists were Otolose Faingaanuku, Isabella Galvan (both Y13 – netball), Molly Spark (Y13 – multisport), Georgia Thomson (Y12 – rowing), Lachlan Frazer (Y13 – water polo), and Taiko Torepe-Ormsby (Y13 – swimming) in the Outstanding Individual Achievement category; the Adventure Racing team and Multi-sport team in the Most Outstanding Team category, and Cameron Slee (Y13 – hockey, cricket, water polo and swimming) in Best All-Round who achieved in more than one Sporting Code.