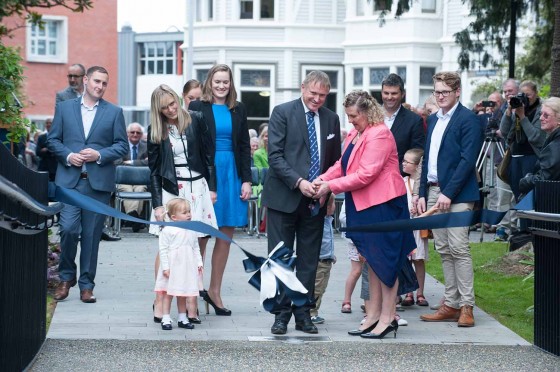 The first people to step over the magnificent new Turley Bridge connecting Strowan House with the Centennial Chapel at its official opening on 27 October, was the St Andrew’s family whose generosity made it all possible.

Margaret and Murray Turley (1971) made a significant contribution to enable the construction of this striking steel structure, which was fabricated by their son-in-law Jarrod Marsden at his Geraldine-based firm, Marsden Engineering.

Also on hand to mark this wonderful occasion were Margaret and Murray’s four daughters, son Lachlan (2010), their son-in-laws, and seven grandchildren.

“It was very special for Margaret and I to have all of our family there for the ceremony, and exciting for Jarrod after the hard work that went into the manufacture of the bridge. We were grateful for the appreciation from St Andrew’s and Rector Christine Leighton’s kind words as the bridge was officially opened,” says Murray.

Margaret, who is a trustee of the St Andrew’s College Foundation, says she and Murray had initially thought about ways they could contribute to the new Centennial Chapel, but when they heard about the bridge rebuild knew it was the right fit for them.

“The linkage it provides from the school to the Centennial Chapel really resonated with us.”

Murray, who has a rural South Canterbury background and started as a boarder at St Andrew’s in the 1960s, says he wanted to leave a lasting legacy at the College, which was instrumental in helping setting him up for life ahead.

“I had fantastic Agriculture teacher at St Andrew’s, Wally Stark. After finishing school I elected to go straight home to the farm, and the grounding I got at St Andrew’s stood me in good stead. I later used my St Andrew’s Agriculture notes to study for the Young Farmer of the Year competition and made the national final against contestants with university degrees.”

Today the Turleys run a large-scale arable and vegetable operation in South and Mid Canterbury, with their home base near Temuka.

Margaret says they were delighted when son-in-law, Jarrod Marsden’s quote for the job was accepted.

“Jarrod is a highly skilled engineer with great attention to detail. We are incredibly proud of the results of his hard work.”

The bridge’s 27 metre long steel sides were taken from Geraldine to Timaru to be painted, then trucked to Christchurch during the night, arriving at St Andrew’s in the early hours one morning.

St Andrew’s College General Manager, David Evans says a massive crane provided by Armitage Williams lifted the steel sides above the trees on the Norman’s Road boundary, and positioned them in place on the bridge’s foundations.

“No trees were damaged, and the bridge fitted perfectly onto the foundations. It was an impressive team effort.”

Once the bridge was in-situ, railings were installed to provide the finishing touch, along with new landscaping. Now that it is open, the Turley Bridge is a much-loved and well-used piece of infrastructure on the College campus.

“We are delighted to see the well designed and constructed bridge fit so well among all the wonderful facilities at St Andrew’s, which are testament to the hard working Board members as well as the fundraising and generosity of Old Collegians,” says Murray.