No longer the ‘elephant in the room’

Let us introduce Gus Speth. Known by most for his role as Chairman of the US Council on Environmental Quality (which included the role of US Advisor on Climate Change) for President Jimmy Carter, Gus Speth’s role as Administrator of the United Nations Development Programme and chair of the United Nations Development Group from 1993 to 1999 placed him firmly within the grasp of eco-politics, where the fate of the environment and the economy play out. In March 2016, Gus Speth called for a new environmentalism, "I used to think that top environmental problems were biodiversity loss, ecosystem collapse and climate change. I thought that thirty years of good science could address these problems. I was wrong. The top environmental problems are selfishness, greed and apathy, and to deal with these we need a cultural and spiritual transformation. And we scientists don’t know how to do that."

Gus Speth essentially called for a significant change to the dominant paradigmatic perspective based on greed and apathy. In response to Speth's call for change, we could consider the integral worldview (van Egmont & de Vries, 2011) where the fundamental human balance has to be maintained between material and immaterial value orientations, and also between individual and collective value orientations.

Cr Lan Pham​, who moved the recommendation from chief executive Bill Bayfield to declare the climate emergency and also summed up the debate, thanked Extinction Rebellion, School Strike 4 Climate and all those who cared deeply about the environment. The science is indisputable. This sentiment was echoed recently in an article in the New Zealand Herald.

Let’s start here …. our children’s generation, also our current students' generation, are likely to never know a time when climate change is not a threat. Thirty-one years ago, in 1988, carbon dioxide levels in the atmosphere exceeded 350 ppm. Scientists believed at the time that 350 ppm marked the maximum threshold for suitability of sustaining human life on Earth. Earlier last year, scientists in Hawaii and California confirmed that atmospheric CO2 had surpassed 411 ppm. It is now at the highest concentration in human history. We cannot deny the fact that science on climate change is brutal and unforgiving. The Intergovernmental Panel on Climate Change (IPCC) provide annual reports and the recent 2018 Special Report on Global Warming of 1.5°C can be found here. It is sobering reading indeed. Just how do we address the developed world’s selfishness, greed and apathy to ensure our children are not denied their future? It is relatively easy to indulge in myopic behaviour in New Zealand, particularly Canterbury, as when we look out our windows, or travel a few kilometres in any direction, we are treated to pristine mountain views and lush forests.

So, what strategy can we adopt? Number one, let’s get behind our children’s efforts. The groundswell of young people doing remarkable things to keep hope alive in the face of what is most often portrayed as a ‘grim future ahead’, is simply remarkable. In June 2019, a group of St Andrew's College students will attend one of three Climate Challenge Conferences in New Zealand cities. Later this year, two St Andrew’s College students will attend the Climate Change and Business Conference in Auckland.

Pictured below on a day Cantabrians now associate with a seriously tragic event, we see our young people working together with indomitable spirit to raise awareness of this slow-moving freight train we call ‘climate change’. Their task is to gently and ‘oh so positively’ pry the adults heads out of the sand. 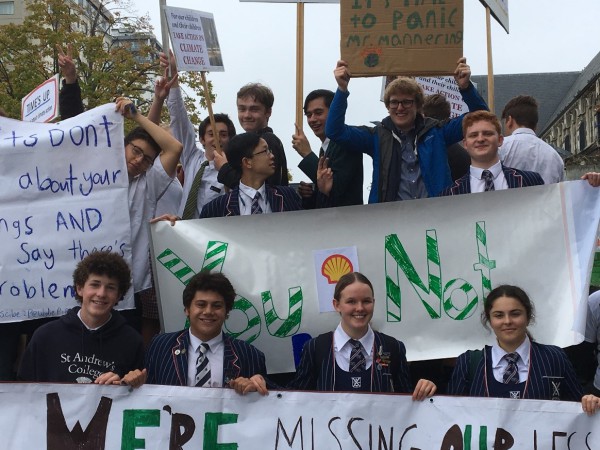 At St Andrew's College, we have a hard-working team made up of staff and students who are focusing on numerous sustainability projects including the restoration of Strowan Stream and its associated ‘duck buster’ tech project, native planting schemes, a shade audit, recycling improvements and drafting of environmental policy documents, to name a few. Many young people simply want to be involved whereas others are looking to accrue and enhance environmental literacy for their future careers. The common thread is a resounding belief that a viable future is theirs, despite the evidence reported by the scientific community.

The Preparatory School also has has a strong Sustainability Council led by Ms Nicky Vincent. Seen here are a group of students displaying their recent gardening efforts. 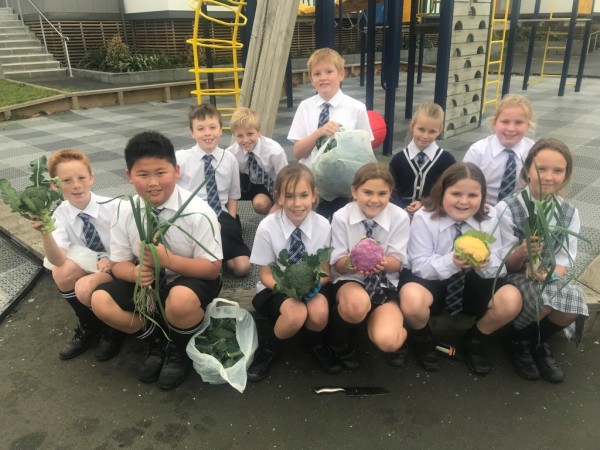 St Andrew's College has recently employed the services of Paul Barrett, Environmental Consultant, to initiate a carbon reduction plan which will form a critical component of our Sustainability Strategy. While we are not ready to sign up to a commercial Environmental Management System (EMS), we recognise as an ethical and forward-thinking business that our responsibilities under the Paris Treaty need to be taken seriously, particularly a focus on transparency and reporting. Our Sustainability Council leaders are busy developing the policy for this carbon reduction plan, working alongside Paul Barrett and General Manager, David Evans.

On the role-modelling front, our Head of Secondary School, Mr Evert van Florenstein is seen below in his hybrid-powered vehicle alongside the Heads of the Sustainability Council, Daniel Bishop and Thomas Pope-Kerr (both Year 13). 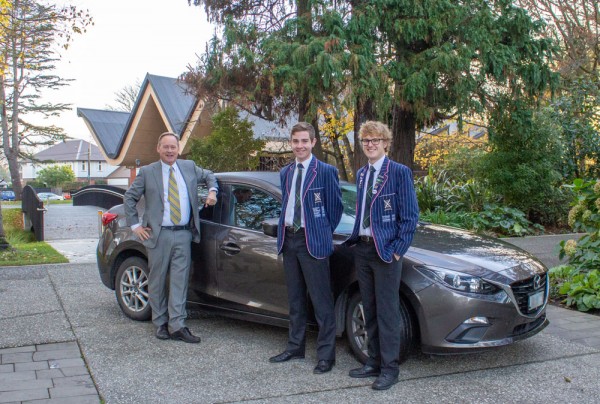 In addition, St Andrew's College staff did extremely well in the Aotearoa Bike Challenge this year. In support of our students, we are initiating a ‘carless day pledge’; not the carless days of the 1970's when kiwis were trying to conserve the holy grail of the moment after the second oil shock. This proposed carless day initiative is focused on behavioural change for a fossil-buring free future. We welcome parents to get on board with this. Details in the next blog.

The next blog post titled ‘And what about our farming sector’ will start with a review of Simon Upton’s March 2019 report (news article here) as Parliamentary Commissioner for the Environment, where he draws a distinction between the greenhouse gases. We will also hear from two of our farming parents who are working hard to make their businesses more sustainable.

“When you talk, you are only repeating what you already know. But if you listen, you may learn something new.”
- Dalai Lama