Why StAC< Latest News< A new ‘time of their lives’

A new ‘time of their lives’ 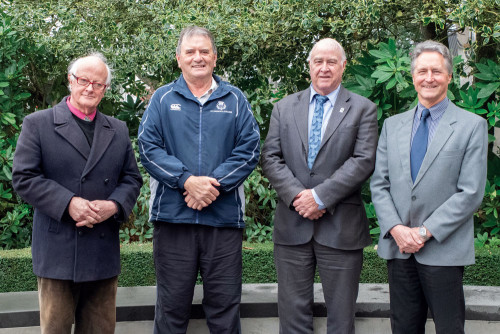 St Andrew’s College is preparing to honour and celebrate the significant contributions made by four long-serving staff members, who are retiring at the end of the year. Between them Geoff Stanton (1984), Pete Feary (1986), Alastair McGowan (1992), and Simon Williams (1997) have devoted nearly 120 years of service to the College.

Geoff Stanton was the first of the four to arrive at the College and says it has been a privilege to work with such committed staff and students over 35 years. He is proud of his involvement and leadership in establishing Core Physical Education and Health classes at St Andrew’s College across all year levels, creating NCEA Physical Education across the three year levels, supporting staff as the ISEA representative for many years, and incorporating Māoritanga in the College in many different ways. He has also been heavily involved in the Sports programme, coaching and managing rugby for 18 years, the Senior A Boys’ tennis team for 30 years, badminton for 15 years, and some cricket and football. As well as leaving St Andrew’s, Geoff is also leaving Canterbury. “I’m moving back to the Far North, to help out my iwi, and work in tourism. Haere ra Hato Anaru.”

Pete Feary agrees that working with good people – students and staff alike, has been a highlight of his time at St Andrew’s College. “One of the many benefits of working with young people is that their energy and enthusiasm helps to keep you young at heart.” Pete joined the Physical Education Department in 1986 and also taught in the Science Department. He was Teacher in Charge of volleyball for 23 years and enjoyed working with ‘many enthusiastic coaches and players’. He became Head of Careers in 1990 and is happy to have helped oversee the development of a well-appointed Careers Centre, which will continue to serve students well. The introduction of co-education to St Andrew’s is one of many highlights, he says. As retirement beckons, Pete is planning spontaneous adventures, enjoying time with family and friends, travel, and giving back. “I’ll definitely be spending time in the high country with a fly rod in hand,” he says.

Alastair McGowan joined the Technology Department in 1992, with the trade qualified engineer saying he never anticipated his career path would detour into teaching. “After the conclusion of the ‘Think Big’ projects and the 1987 stock market crash, I thought my chosen career was over. Teaching had other ideas and I now look back over what has been a very satisfying journey, while remaining connected to my engineering roots and passion.” He says ‘working with and inspiring amazing students’ in his subject area, celebrating student successes and achievements, starting Girls’ football, and his involvement with the Music Department have been highlights of his time at the College. On his retirement, Alastair is planning a special extended visit to his son and family in the UK and has other ideas and projects to explore. “My nine grandchildren, and one on the way, will definitely benefit from having me around more.”

Head of Media, Simon Williams, says his time at St Andrew’s has been ‘a blast, a fabulous ride’. Simon came from the television industry to start part-time work at the College in 1995, and was made a full-time staff member in 1997, running Media and Performing Arts courses. Some of the highlights of his tenure include producing numerous episodes of youth television shows On Q and Pulse and running The Fashion Show at St Andrew’s from 2002–2005 – a national youth fashion event involving around 200 students. He also ran 30 Beyond the Camera courses at St Andrew’s from 1995–2010 which ‘breathed its magic’ on 2000 students from around New Zealand. Simon is proud of creating a ‘unique in New Zealand’ television studio at St Andrew’s and seeing the progress of various College alumni who are now working in television, film, or theatre. In his retirement, Simon plans to write novels, short stories and blogs, archive 19 boxes of tapes of St Andrew’s College history, develop his garden, and restore antique furniture. “After 25 years in television, I’ve had 25 years at St Andrew’s College, where my finest work has been Beyond the Camera, and The Fashion Shows. I always said I wanted to give students the time of their lives, and I’m satisfied I have done that.”

St Andrew’s College is preparing to honour and celebrate the significant contributions made by four long-serving staff members, who are retiring at the end of the year.