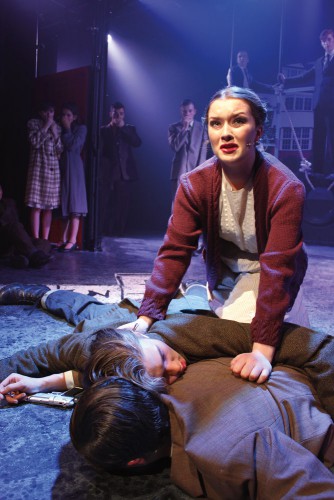 “Did you hear the story of the Johnstone twins?” the audience was asked at the start of this year’s Senior Production, Blood Brothers.

And by the end, they had not only seen and heard the tragic story of the Johnstone brothers, they had been astounded by the maturity, depth of emotion and understanding displayed by the talented young cast who brought the story to life.

A sell-out audience of around 1300 people saw Blood Brothers during its six-night run at the start of Term 2. Spontaneous standing ovations at the end of each performance left the company, band, crew, Director Laurence Wiseman, Musical Director Duncan Ferguson, and Choreographer Ginner Thorner, in no doubt as to the level of audience appreciation.

Blood Brothers is the powerful story of twin boys, separated at birth, who despite the forces working against them, form an unlikely, yet powerful friendship, without knowing the other’s true identity. It also tells the story of two very different mothers, who make some life-altering decisions with the best of intentions but the direst of consequences.

There were some outstanding performances in Blood Brothers.

Head Girl, Kirsty Shields (Year 13) wholly inhabited the pivotal role of Mrs Johnstone, a single mother with a brood of hungry children, who struggled to live with her heartbreaking decision to give away one of her twin babies. Kirsty evoked incredible emotion, sang beautifully, and was utterly believable as the strong, generous mother.

Jenna Wells (Year 12) was another standout performer and singer, playing the highly complex Mrs Lyons, the childless, well-to-do employer of Mrs Johnstone who takes her young twin, Edward to bring up as her own. It is not an easy task to portray such an unsympathetic character, but Jenna did a remarkable job as she took the audience on Mrs Lyons’ journey from lonely housewife, to over-anxious mother on the brink of madness.

The brothers’ relationship, and its eventual demise, was at the heart of the show’s powerful themes of nature versus nurture, love and hate, and cause and effect. 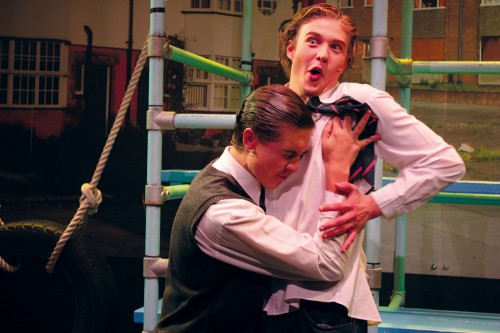 As the ill-fated twins, Philip Nordt (Year 12) who played Mickey, and Harry Wilkinson (Year 13) who played Edward, were exceptional. Both seamlessly met the challenge of portraying the brothers as seven year olds, 14 year olds, and as young men.

As the cheeky, swaggering, yet shy Mickey, Philip was a revelation. His nuanced and heartbreaking performance, particularly as Mickey unravelled towards the end of the show, was breathtaking.

Harry was similarly impressive as the more buttoned up, naïve and privileged Edward. During his excellent performance he embodied the character, who as a young boy revelled in the company of Mickey, but who as a young man, lacks understanding, sympathy and compassion for his plight.

The other lead, Hana Pearce (Year 12), was a wonderful Linda, the feisty, humorous girl both brothers fell in love with, ultimately leading to their tragic end. She did a great job of evoking Linda’s love story with Mickey, and showing her despair when his depression and addiction ruined their future together.

The main cast was well supported by the Narrators – Benjamin Oxley (Year 13), Archie Milligan (Year 12), Elliot Wood (Year 12), Jeffrey Beard (Year 13) and Leo Noordanus, and a large ensemble, who although they had few speaking parts, took to their roles with relish.

The musical numbers were pitch perfect and beautifully choreographed. The audience were also stunned by the professionalism and sensitivity displayed by the young musicians in the band, led by Musical  Director, Duncan Ferguson.

Rector Christine Leighton said it was enormously satisfying to hear the effusive comments of Old Collegians and other audience members after the show. “Every year I am proud, delighted, surprised and grateful for the shows produced in our little StAC Theatre, and Blood Brothers was one of the best. Congratulations to Laurence Wiseman, Duncan Ferguson, Ginnie Thorner, Sylvia Campbell, the production crew, parent helpers and our wonderful, talented students. This show will certainly be remembered.” 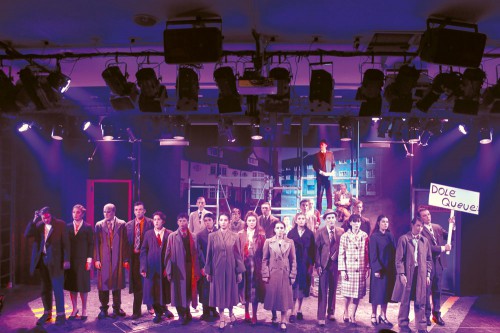 Ask Head of Drama and Dance, Laurence Wiseman, how the students pulled together a performance of such maturity and integrity in Blood Brothers, and he has a simple, if slightly irreverent answer. “They’re not given the option.”

As the show’s director, Laurence spent many hours with the students unpacking the meaning behind the words and songs in the script, while finding ways for them to serve the story and convey this to the audience. “We had some amazing conversations with the cast about life and big themes such as nature versus nurture, growing up with privilege or without, and whether or not our fates are already sealed.”

Laurence watched every performance of Blood Brothers, and said he felt like a ‘proud Dad’. “By the time we got to Opening Night, the students had taken total ownership and were adding new layers and depths to their performance each night. I get quite emotional watching them and seeing how far they’ve come.”

Now in his fifth year as Head of Drama and Dance at St Andrew’s, Laurence says he knew at the age of 15 he wanted to be a secondary school Performing Arts teacher. “I had an amazing English teacher who took on the role of running the school productions. I adored her, loved being in the cast, and thought she had the best job in the world.”

After a year at Waikato University, Laurence attended NASDA, where he completed a Performing Arts degree, majoring in Musical Theatre, Acting, Singing and Dancing. “I flirted with the idea of being a professional performer, but in the end decided teaching was for me.”

In 2006, after gaining a Diploma in Teaching from the College of Education, Laurence became Head of Drama at Linwood College. His six years there was followed by two years at Aranui High School, before he became Head of Drama and Dance at St Andrew’s. “One of the great things about St Andrew’s is the energy. There is no room for apathy or complacency here, and I love that.”

With the bar seeming to raise higher with every Senior Production, Laurence says he puts pressure on himself to maintain the momentum. “I do have my favourite shows, but the point is to choose material which is suited to the students coming up, and what will best serve them. When we meet, love the material and are working together towards the same outcome – that’s gold.”

Unlike a work of art that hangs silently on a wall for decades, theatre is ephemeral. It is what it is, for that moment in time, for those people involved. For the audience it can be a magical night out, a chance to laugh, cry, to be moved, and caught up in a story other than their own. But for the participants: the students, cast, crew, band members, production team, it is the process of creation, not only the performance, which ensures something lives on once the final curtain has fallen.

Theatre creation provides students with a network, a community, a sense of belonging. It allows them to see the best and worst of people. There are highs and lows, ones which create relationship and also strain relationship, but must be endured all the same, as failure is not an option.

Under the guise of ‘putting on a production’, so much more is learnt and discovered. It is more than simply learning acting technique, stagecraft and musicianship – it is about life lessons, problem-solving, communication, empathy, understanding and tolerance. The beauty is perhaps that students are developing this blissfully unaware – they are simply ‘putting on a production’, when in fact the performance is merely the icing on the cake.

So, ‘Why do we do it?’ There is no simple answer, as the answer is something lived and experienced, an answer that is different and unique to every production, every student, every participant. All I know is that we will do it all again, surviving on coffee and  adrenaline until we find ourselves in this space again, this suspended hiatus, reflecting, questioning why, but slightly changed, all the better for it.

“Did you hear the story of the Johnstone twins?” the audience was asked at the start of this year’s Senior Production, Blood Brothers.