Why StAC< Latest News< Castle Hill – A Legacy Lives On

Castle Hill – A Legacy Lives On

The College’s first Mountain Lodge at Castle Hill was officially opened on 1 May 1965. Many St Andrew’s boys in the early days had their first taste of adventuring at Castle Hill.

Exploring the outdoors is an intrinsic part of life in New Zealand, and students at St Andrew’s College, are fortunate to enjoy a top-quality Outdoor Education programme in award winning facilities at Castle Hill, in the spectacular Canterbury High Country.

There are very few schools with such an enviable programme and environment to explore. According to the College’s early history book, High Flies the Cross, it is a privilege that can be traced back to one man, a teacher, F J ‘Ted’ Bennett, who joined the staff in 1933, and can take ‘chief credit for the notion and siting of the College’s Mountain Lodge’.

Craigieburn was Bennett’s place of escape and relaxation away from school routines. He would go on regular tramping and hunting expeditions in the Trelissick Basin and Castle Hill areas with others, and from 1954 onward was joined by another St Andrew’s staff member, Frank Finnegan.

In 1962, the new Rector, Ian Galloway, had barely got his feet under the table when he was propositioned by Bennett and Finnegan, who were keen to build a mountain hut for the College in the Castle Hill area and start an Outdoor Education programme. In a fortunate coincidence, around the same the College was left a substantial amount of money by William MacGibbon, who had been St Andrew’s first Board Treasurer in 1917. Bennett and Finnegan’s ‘mountain hut’ scheme caught the new Rector’s interest. 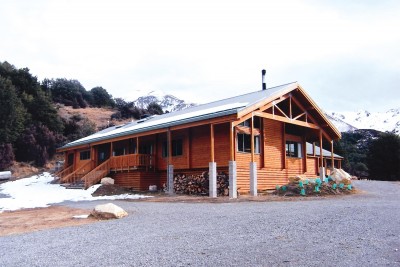 Rector Ian Galloway presented a report on the matter to the Board in June 1962, and it was agreed to proceed immediately, with an application made to the Conservator of Forests for the use and development of the chosen site for the mountain lodge.

Bennett had already earmarked the site for the new building – on a clearing on a terrace above the Thomas River. “Put the lodge here,” he said to an inspection party led by himself and Finnegan, as he puffed on his pipe. And they did.

Work began in October 1963 and was a real community effort. Parties of parents, staff, Old Collegians, and pupils formed nearly a mile of access road, built a river crossing, piped fresh water underground for half a mile, trucked in huge quantities of materials and worked on the lodge itself. Key organisers included T M Stanton and Jack Callaway of the PTA, GAM Hilson (OC 1924) with his connections producing an endless supply of donated building materials, and Kelvin Eaves (OC 1953) who bulldozed the final steep cutting (named after him) from the ford to the Lodge site. The new Mountain Lodge was officially opened on 1 May 1965 in front of a crowd of 800 people.

Many boys at St Andrew’s College got their first taste of outdoor adventuring at Castle Hill, with the facilities giving a fresh dimension to a range of classroom subjects, and also providing a superb location for cadet training.
During the 1980s more work was completed on the lodge, with the Outdoor Education programme greatly enhanced to give boys expert training in all sorts of new experiences, including abseiling, snow caving, boulder climbing, bivouacking, and even a mountaineering course.

In the mid-1990s, the Castle Hill Outdoor Centre had a reputation for running one of the best Outdoor Education programmes in the country. Other schools and touring groups also started to use the facilities.

In 2008, the lodge was completely rebuilt into the state-of-the-art centre for outdoor and leadership programmes which are enjoyed by St Andrew’s College students today. It was renamed the Alistair Sidey Mountain Lodge, following a significant donation by Michael Sidey (OC 1968) in memory of his late brother Alistair
(OC 1966) who lost his life in a car accident in his early 20s.

We can only imagine what Ted Bennett would think of the legacy he helped to create, with the exceptional facilities and outstanding Outdoor Education programme offered by St Andrew’s today, which benefits hundreds of students every year.

Our Castle Hill lodge has an integral role in St Andrew's history and Outdoor Education programme.