In August, Year 3 students were involved in a tree planting project at Mary Duncan Park on the Port Hills, as part of an inquiry called ‘Our Trees, Our Treasure’. To raise money to buy trees to plant, the children organised two busking sessions in the Junior Department. There were a variety of performances – dancing, musical items, and magic tricks, which were supported by the school community. The students visited Trees for Canterbury to collect the plants they had fundraised for.

Each Year 11 tutor group made up a Christmas Hamper, which were delivered to the Salvation Army for families in need. The initiative was led by Meg Longley (Year 13) and Liam (JT) Longley (Year 11).

Parents, caregivers, students, and staff from the Senior College donated over 700 cans, cereals, pasta, sauce mixes, and other dried goods to help fill the shelves at the City Mission.

Year 9 boarder, Ursula Grant, cut her hair to raise money for Child Cancer. Her long locks were sent away to be carefully stored in order to make wigs for those suffering with cancer treatment.

Elena Limmer-Wood, Kelly Ting and Brooke Matthewson (all Year 12), are 2019 Youth Ambassadors for Hagar New Zealand, which supports people who have experienced severe trauma as a result of slavery, trafficking, or abuse. The students organised a fundraising dinner for the charity, which was set up as a ‘meal lottery’ to highlight the impact poverty has on our choices and opportunities in life. The ‘winners’ and ‘losers’ were served different meals. It was a great evening, with the girls raising over $2000.

The Middle School Leaders organised a mufti day to raise awareness for Pillars, an organisation which helps children whose parents are in prison. The theme was to dress in orange and yellow, with the event raising $1260. 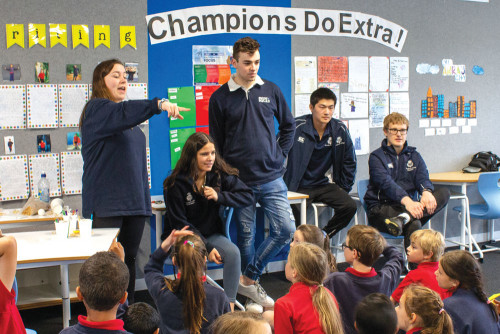 The final Prefect Legacy project for 2019 saw the students partner with South Hornby School for a day of games and lots of fun. Throughout the year the prefect team have been fundraising, including funds raised via the Smurf Squad supporter gear and the Years 9–10 Dance, to purchase and donate a wide range of sporting equipment to South Hornby School. The prefects engaged in many different activities with the students at South Hornby School, and were joined by several members of the 2020 prefect team, to help cook and serve a sausage sizzle at lunchtime. 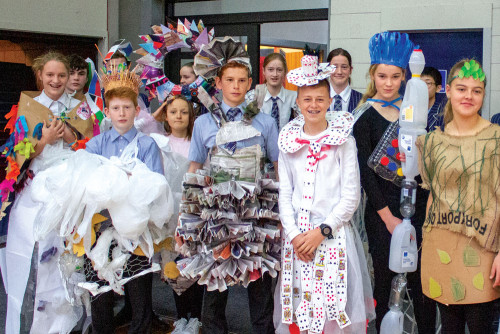 Year 9 tutor groups were given the challenge to work as a team, show creativity, and consider using recyclable items to make Wearable Arts. The competition culminated in a fashion show in Gym 1. The students created some fabulous costumes, which made the decision extremely difficult for judges, Head of Middle School, Mikae Tuu’u, and Teacher in Charge of the Sustainability Council, Ellen Hampson. The winners were 9JGI for their fashion magazine costume. The Best Model went to Morgan Lee, for her plastic waste costume.

Character strengths were celebrated at the inaugural Well-being Assembly, which was led and organised by Heads of Well-being, Thomas Pope-Kerr and Rinay Chandra (both Year 13), the Well-being Committee, and Year 11 students Oscar Bloom and Tapenisa Havea. The guest speaker was Year 12 student, Hugh Montgomery, who shared his thoughts on the importance of well-being and resilience after a significant injury dashed his sporting hopes and dreams for 2019. The following students were the recipients of Character Awards, selected by student vote:

Congratulations to all our prize winners at our 2019 Prizegiving.

The Rector's Address from the third edition of Regulus for 2019.