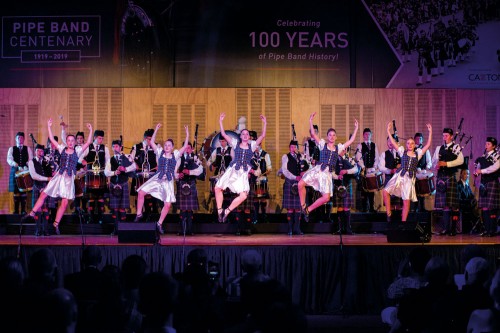 The Centenary celebrations concluded on the Saturday evening with a wonderful concert, featuring current and former band members, Highland dancers, and a high spirited Ceilidh. “We opened the event up to ticket holders to both the Friday and Saturday night events, and incorporated some of the items from the Friday night concert, which had been cancelled, into the programme. It was an excellent night,” says Richard.

Among the highlights was a special Pipe Majors’ Performance, featuring 12 former Pipe Majors from the band playing together, and a Drum Fanfare, featuring a group of Old Collegian drummers who gave a polished performance of the Alex Duthart Salute. “Performances from Old Collegians who played with both the Canterbury Caledonian Society Band and Scottish Society Band was another highlight,” he says.

The rest of the concert featured items from the current band, and Highland dancers from the Julie Hawke School of Highland Dancing.

Then it was on to the Ceilidh, with haggis, drams, and the crowd dancing the night away to the Charlie Jemmett’s Incredible Ceilidh Band. During the night, Charlie announced that he was retiring, after 60 years with his band.

Instead of a live auction, this year the Pipe Band decided to run an online auction via Trademe of a stunning painting of a piper outside Strowan House by Kelvin McMillan, a set of bagpipes, a drum, and a full tartan Highland outfit, which raised $5,900.

Richard Hawke was delighted with the two days of celebrations, and says special highlights were the huge turnout on the Saturday morning, and the packed programme of entertainment on the Saturday evening. Rector Christine Leighton said the College was grateful to everyone who attended and made it such a memorable weekend including event sponsors. “We thank the organising committee, Richard Hawke, Andrew Murray, Lewis Gibson, Kelsey Williams, Kate Stanbury, Anj Hawkins, and Bid Constanti, with special help provided by the Communications team, led by Head of Communications, Kay Shaw. Our College Archivist, Pip Dinsenbacher, and Head Graphic Designer, Craig Morgan, created some wonderful stories, visuals, and memorabilia for the occasion, and we also thank Rainer Klebert, Chairman of the Parent Supporters and Volunteer Committees, and the huge volunteer team, who all contributed to the Centenary’s success.”

Richard says he has had very positive feedback from those in attendance. “The greater Pipe Band community is a very special part of the St Andrew’s College family, and these celebrations have honoured everyone who has been involved over its long history.”

The Centenary celebrations concluded on the Saturday evening with a wonderful concert.