From the third edition of Regulus for 2021

All dancers performed beautifully in the annual Ballet examinations. The dancers who achieved the highest level in their examinations, only attainable from Year 4 and over, are:

An unprecedented number of high-level results were obtained by dancers in the St Andrew’s College Ballet Academy:

A group of Music students performed well in the Christchurch Big Band Festival. The public performances were possibly the last time that eight Year 13 musicians would perform together. 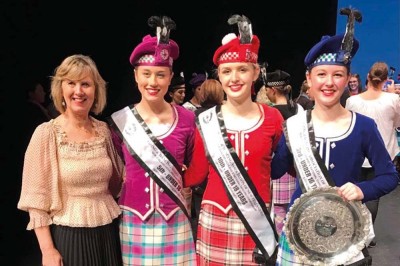 On a beautiful spring afternoon, St Andrew’s jazz musicians performed a great gig at Fat Eddies, a jazz club on The Terrace. The Jazz Orchestra, Big Band, Soul Band, and the Senior Combo, Club 347, played a range of classics, well-loved charts, and covers of contemporary music, along with some original pieces by student composers.

Eden Taylor (Year 7) successfully auditioned for a role in Matilda being performed with Showbiz next year. She auditioned along with 260 students from around New Zealand.

Jessica Drury (Year 8) was selected as Concert Master of the 2021 Christchurch Schools’ Music Festival, which was to be held in a reduced format at Cashmere High School's Performing Arts Centre due to COVID-19.

Eva Hitchon (Year 13) was awarded an ATCL with Distinction in Piano from Trinity College.

Songwriters Struan Gordon (Year 11), Grace Lawrence and Cindy Xiong (both Year 12), and Matthew Fleming, Alice Burnett and Imogen Roberts (all Year 13) were named as finalists in the Lion Foundation Play It Strange Songwriting Competition. They each received $750 towards having their songs professionally recorded.

Sisters and Pipe Band members, Georgia Eagle (Year 11) and Tayla Eagle (Year 9) performed at a fundraising concert with Rakes o’ the Gael at the Speirs Auditorium in Palmerston North to raise money for Breast Cancer Research.

The Highland Piping Society of Canterbury were extremely fortunate to be able to run the Silver Chanter Labour Weekend competitions, which were held at the College. Many of our pipers were able to perform their tunes that they have been working on over the last few months. First placegetters were:

The third indoor solo piping competition of the season was held at St Andrew’s College. Our Pipe Band students featured well throughout the prize lists. First placegetters were:

A group of 29 jazz musicians from St Andrew’s College participated in the Southern Jam Youth Jazz Festival in Blenheim, where Flynn Megaw (Year 13) was recognised as the Best Trombone Player of the festival.

A group of 41 Preparatory School students took part in the Speech and Drama section of the Christchurch Competitions Society Festival of the Arts. They all gave great performances, and all gained at least a Commended ribbon for their efforts. Students to achieve at least one top three placing and medal awards were:

A large group of Preparatory School students sat their Speech and Drama examinations at the end of last term. They all achieved fantastic results, with everyone gaining passes in the top three of the eight levels of pass. The following students gained Honours passes:

The following students gained the highest level of pass Honours for Speech New Zealand or Distinction for Trinity College.