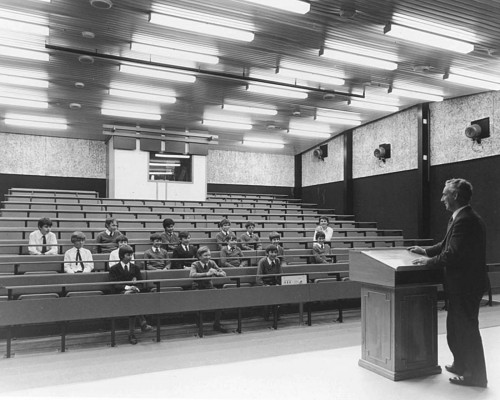 The lights have faded and the curtains closed on almost 50 years of history for the Theatrette, which is about to be deconstructed to make way for the new Ben Gough Family Theatre.

Head of Drama and Dance, Laurence Wiseman, is excited at the prospect of a new professional theatre facility in which to work his magic with Drama students and productions, but feels a tinge of sadness that the Theatrette will be lost. “That is the bittersweet thing about theatre – all the magic happens, then it’s gone and won’t ever happen like that again. I have so many great memories in the Theatrette, and know every inch of the space because it is so small. It has been my creative home for almost every day of my eight years at St Andrew’s, and was home to many others too, from my teaching colleagues, Drama students, and production casts, to our wonderful theatre geeks and tech kids.”

It was way back in 1972 – that a fundraising campaign began to raise money for a new teaching block (the Arts block) and a lecture theatre/cafeteria complex. By the end of 1972, $375,000 had been raised for both facilities, including $10,000 promised by staff of St Andrew’s College, and around $5000 raised by the boys during workdays, largely driven by their keenness for a new Cafeteria.

Demolition of the old gymnasium block took place at the beginning of the Christmas holidays in 1972. Paynter and Hamilton was awarded the contract to build the new Cafeteria and Theatrette, which got underway early in 1973 and opened at the beginning of Term 3 that year.

In High Flies the Cross, the late Gordon Ogilvie (OC 1951 and a former teacher at St Andrew’s) reported that the new Theatrette facility was highly anticipated. “There was at long last a facility in the new theatre, which could do justice to school Drama and serve as a comfortable venue for lectures, meetings, films, debating, and public speaking.”

When Preparatory School Art teacher and St Andrew’s College historian, Pip Dinsenbacher, joined the teaching staff in 2000, she says the multi-purpose Theatrette was used for everything from performances, staff, student and parent meetings, Rector’s addresses to staff, Preparatory School Assemblies, and teacher union meetings, to lectures from visiting speakers, boarders’ events, Deans’ meetings, PTA events, promotional events, films, College events, and family events. Dance and Drama teacher, Ginnie Thorner says it is still very much a multi-use space, used for Drama teaching, productions, speeches, visiting performers, Drama clubs, and events such as Ballet shows, Dance Revue, Film Fest and Cultural Showcases, as well as being hired out by outside groups for all sorts of occasions. 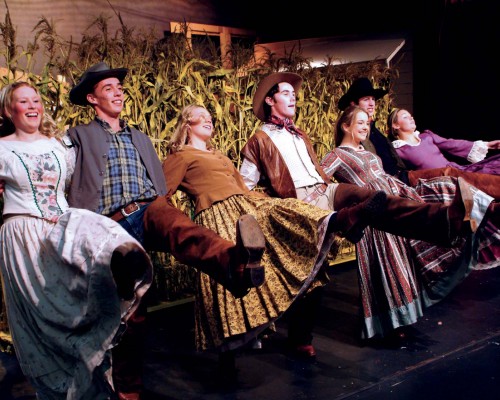 Dance and Drama teacher, Ginnie Thorner, is another member of staff who has a long history with the Theatrette, and like Head of Drama and Dance, Laurence Wiseman, has mixed feelings about its demise. “I’m definitely excited about the new Ben Gough Family Theatre, and the amazing working space the architects have created. However, I do feel a little nostalgic about the Theatrette, which is a small, weird, and properly old theatre. It is a place of many memories, creativity and beauty, and has been a challenging, fun, exhausting and exhilarating space to work in.”

Laurence, who directs the amazing Senior College Productions each year, agrees that the Theatrette’s small size has been its major constraint, but this has also led to its biggest highlights for the production teams. “It has been a significant creative challenge for us to produce big shows in this small space – getting so many students on stage without it looking too cluttered or overwhelmed. I’ve loved that aspect of putting on the shows.”

Ginnie has produced and directed many wonderful Middle School and Preparatory School Productions during her time at the College. She says having no fly floor or much backstage storage has also demanded creative solutions, and there has been little space for keeping props and costumes. “One of the great things about not having individual dressing rooms in the Theatrette was the sense of teamwork and collaboration that occurred when we used the Cafeteria as a dressing area. We have kept this aspect in the new Theatre design – a communal space that can become a dressing room.”

Ask Laurence and Ginnie about their most memorable shows in the Theatrette, and both have clear favourites. “My most notable will always be Parade. It was an epic story, with a challenging premise around discrimination, which we produced the same year as the terror attack in Christchurch. It will take a lot of beating for me personally,” says Laurence. 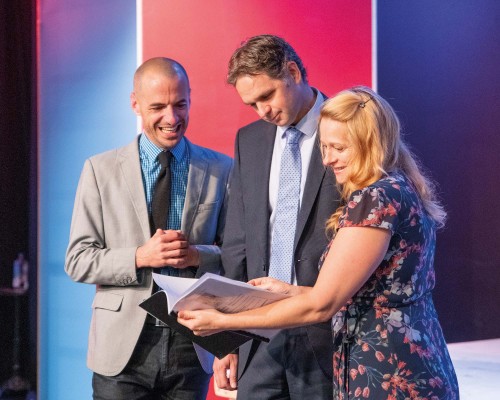 Suspect, written by Old Collegian, Isaac Shatford (OC 2014), Anything Goes for its old time charm and hard-working cast, and The Drowsy Chaperone, for its fantastic cast and being a hilarious show to create, are at the top of Ginnie’s list.

Their long-time collaborator, Head of Music, Duncan Ferguson, who arranges and produces the incredible live music for every show, is in agreement. “My favourite shows have to be The Drowsy Chaperone, which was so funny, and Parade. The musical and technical challenges involved with Parade were so hard, and it was immensely satisfying to pull these off to such a high standard.”

Unlike Laurence and Ginnie, Duncan is not sad at all to lose the Theatrette. “It has been awful having an orchestra in the laps of the front row all these years. I think I’ll be the first there with a sledgehammer when it’s time to bring it down. The new facility will be the best equipped theatre in any school in New Zealand. It will be wonderful to be able to walk into it.”

Space is something Laurence and Ginnie are also looking forward to. “The new Theatre will give us the ability to do a whole host of musicals and shows we have been unable to do in the past, and we’ll be able to use larger bands and the orchestra. It is a whole new chapter for us, and the chance to create a new home for Drama, productions, and performance at St Andrew’s College,” says Laurence.

The lights have faded and the curtains closed on almost 50 years of history for the Theatrette.