Why StAC< Latest News< Georgia off to Junior World Champs

Georgia off to Junior World Champs 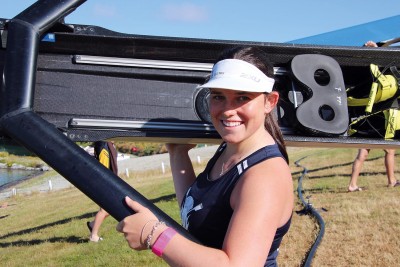 After a stellar two seasons on the water for St Andrew’s College, Year 13 student, Georgia (Gigi) Thomson, is getting a taste of what it is like to be an elite rower, following her selection for the New Zealand’s Women’s U19 Quad to compete at the Junior World Championships, in Varese, Italy. “It is a new experience to go to a World Championships. I’m excited to compete against the other countries and see how we go.”

Gigi’s selection came after an intense six days of trials. The fact she is still an U17 rower makes her achievement even more impressive. In late June, she headed into a three week training camp with the New Zealand team at Lake Karapiro, before embarking for Italy.

Gigi has shone at the last two Aon Maadi Cup Secondary Schools’ Rowing Championships, winning two gold and one silver medal. In 2021, she put on a powerhouse display to win the Girls’ U16 single sculls, and this year, she and Friederica Todhunter (Year 12) delivered an outstanding performance on the final day of the regatta to win a gold medal in the Girls’ U17 double. The double celebrations continued for Georgia and Friederica, as they also picked up silver in the Girls’ U17 quad, along with Sophie McNee (Year 13), Amy Hughes (Year 12) and coxswain, Isobel Forsey (Year 11).

Maadi Cup is the pinnacle of secondary schools’ rowing, so to win one medal is an impressive achievement, let alone three. The medals mean a lot, says Gigi. “It’s a good feeling to go out there and have my best race, knowing all the work I’ve put in throughout the season has paid off.” Does she have a favourite? “They are all amazing achievements, but because the single last year was my first medal, it was very exciting.”

Gigi started rowing in Year 9 at Wakatipu High School and came to St Andrew’s on a rowing scholarship in Year 12. She is full of praise for the rowing programme at St Andrew’s.

“It gives novices a taste in their first year and builds them up over time. The coaches understand your strengths and challenges and support you to be the best you can be. The results prove what they are doing really does work.”

Being part of the rowing programme is a big commitment, with regular morning trainings and rowing sessions at Kerrs Reach around three days a week and on Saturdays during the season.

“It does take up a lot of time, but everyone gets on well, supports each other, and backs each other’s achievements. It is like being part of a big family, and it’s so exciting when the successes start happening during the season.”
Gigi highly recommends rowing as a sport. “If you give rowing everything it really gives back. It opens up endless opportunities.”

Now she has her first taste of representing New Zealand, Gigi is open to whatever the future might hold in elite sport. “If I get the opportunity to represent New Zealand going forward, that would be awesome.”

Georgia's hard work pays off as she is selected for the New Zealand Women's U19 Quad to compete in Italy.