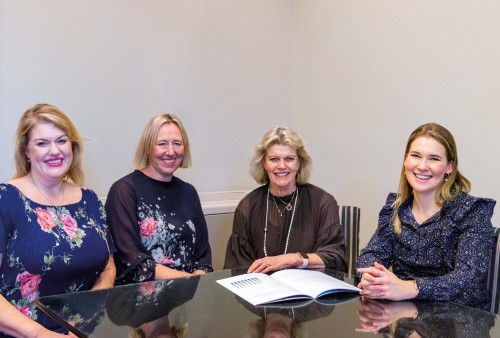 Old Collegians Nominee on the Board of Governors Stephanie Bain; Board Chair Felicity Odlin; Rector Christine Leighton and President of the Old Collegians Association Meg Black.

St Andrew’s College will reach a special milestone in 2022, when it celebrates 30 years since the first female students came through its gates and it became a co-educational school.

The gender balance has been slowly shifting in College leadership roles over this time, as the number of girls at the College have increased to 40 per cent. Rector Christine Leighton has been in her role for almost 14 years and during that time the percentage of female teachers has grown to 52 per cent in the Secondary School (full-time equivalent). A number of females are also represented in significant senior leadership roles across the College.

Some other stakeholder groups have recently reached some ‘firsts’ in female leadership with Meg Black (OC 2010) becoming President of the Old Collegians Association in 2020. At the Annual General Meeting of the College on 1 July, Felicity Odlin was ratified as the first female Board Chair in St Andrew’s College history, and Stephanie Bain (OC 1992) became the first female to sit on the Board of Governors as the Old Collegian Nominee.

“St Andrew’s has been co-ed for 30 years and during that time girls have been actively involved as student leaders. However, it has taken some time for governance positions to catch up. The appointments of Meg, Felicity and Stephanie feel like an important milestone,” says Rector Christine Leighton.

It is interesting to note that the first girls entering in Year 12 or Year 13 in 1992 are now in their mid-40s, and many of those first student have their own children at St Andrew’s College.

Felicity Odlin says it is an ‘absolute honour’ to be the new Board Chair. “The role is about serving and giving my time and skills in the best way possible to this amazing community we are all part of.” Felicity is the current Finance Manager for Global Culture retail stores throughout New Zealand and joined the Board of Governors in 2016. Her experience working with multi-disciplinary teams in small and medium size businesses, and background in accounting and financial roles, have been a great asset to the Board, particularly the Finance and Audit Committee, and the Student Disciplinary Committee.

She has deep roots at St Andrew’s. Her brother and grandfather both attended, and she and husband, Mark, have two sons currently at the College, Oliver (Year 13) and Lachlan (Year 11). They are excited and proud about their mother taking on the Board Chair’s role, she says. “It’s great for them to see men and women sitting alongside each other at the Board table, working together, and using their complementary skills to benefit the College community.”

Old Collegian Nominee on the Board, Stephanie Bain, brings a unique perspective to the Board table, as she was one of the first girls to join St Andrew’s when it became co-educational in 1992. Stephanie’s father is also a proud Old Collegian, she had two great-uncles who were among the College’s earliest students, and many of her cousins are Old Collegians too. “It was such a momentous and courageous change for St Andrew’s to become co-educational. I was privileged to be one of the first female students at the College, and we learnt so much about having to earn our place in a male dominated world. There has been a generational shift since then and it is now a very different environment. Having my sons, Alexander (Year 2) and Sebastian (Pre-school), at St Andrew’s has given me another perspective again.” Stephanie is a Director and Principal Human Resources Consultant at Sunstone Talent, a company she runs with her husband, Paul Swettenham. “I’m excited to help ensure that the Board continues to build on the legacy and lives to the values and traditions which are already here, and also take things forward as we continue into the future.”

Meg Black, a Chartered Accountant who is working for Synlait, is approaching one year in the role as President of the Old Collegians Association. “I’ve really grown in confidence over the last year and am grateful to the Executive for their support. I’ve always loved coming back to St Andrew’s and walking into Strowan House, and it’s a great feeling to be giving back to the College and representing a group of people who have such a strong connection to it.”

Christine says the strong female representation in these key leadership roles is important for all young women and men, and shows that St Andrew’s College has matured into a co-educational environment where boys and girls, men and women, truly work effectively alongside each other.

St Andrew’s College will reach a special milestone in 2022, when it celebrates 30 years since the first female students came through its gates and it became a co-educational school.