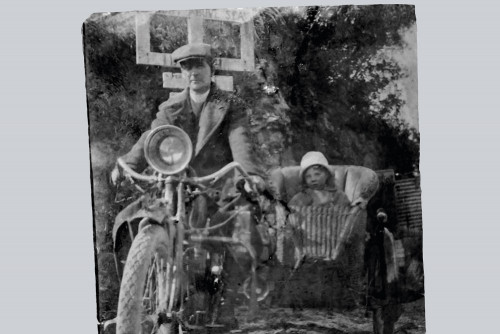 The St Andrew’s College community was unable to gather for the Founders’ Day Assembly because of the COVID-19 pandemic, with many also missing the opportunity to see the wonderful display in The Green Library and Innovation Centre honouring the founder of the College, Rev. A T Thompson.

The display was put together by Preparatory School Art teacher and Museum Curator, Pip Dinsenbacher, and Head Graphic Designer, Craig Morgan, and featured a 1920 AJS combination motorcycle, similar to the one Rev. Thompson famously rode around the College grounds during its establishment at Strowan in 1917. Pip has also been working on a special exhibition in the College Museum about Rev. Thompson, which will be completed once the College reopens. As a passionate historian, who has written about Rev. Thompson many times before, Pip remains just as enamoured with the man he was. “He had a hard life, a tragic life, yet it was also an incredible life, and we really wanted to take this opportunity to celebrate that.”

Alexander Thomas Thompson was born in Invercargill in 1876, and although he missed some of his schooling at Invercargill Grammar School, he still managed to become Dux and win a scholarship to secondary school. However, at the age of 12, and without consultation with his parents, young Alexander left school to become an apprentice draper. He worked for the next four years, attended night school, and became a lay preacher in his mid-teens, before deciding he wanted to forge a career as a minister. After attending Otago Boys’ High School for his matriculation year, Alexander won a generous scholarship from the Presbyterian Church to complete his Bachelor of Arts degree at Otago University, then won a scholarship to complete a Bachelor of Divinity degree at Yale in the United States, becoming the first New Zealander to attend this prestigious ‘Ivy League’ University.

After completing his studies at Yale, Alexander was determined to circle the globe before returning to New Zealand, and with little money, paid $10.00 to work as a cattleman, living below decks on a first-class liner, sailing to Britain. When several of the rich passengers on board heard there was a Yale graduate working as a cattleman, they insisted on meeting him, and upon learning that Thompson’s luggage had been stolen below decks, they gave him £12.00 to kit himself out.

Once he returned home to his fiancée, Mary Kemp, they married, and had their first child, a daughter, at Thames, where Alexander, now Rev. Thompson, had his first parish. They moved to a new parish in Masterton in 1906, where tragedy struck when Mary died in childbirth. Mary’s mother and sister then cared for and brought up Rev. Thompson’s toddler daughter and day-old son away. He threw himself into his church work to try and cope with his grief. Some years later Rev. Thompson married a Masterton woman, Robina Cameron, and they had four children, one boy and three girls.

Around this time, an attempt to start a boys’ school in Masterton was thwarted. He was then instrumental in the establishment of girls’ boarding school, Solway College. Thompson’s sister-in-law, Marion, was its first principal.

By this time, aged around 40, Rev. Thompson had grown a huge reputation, and was called to the St Andrew’s Presbyterian parish in Addington, finding the social stratums and expectations of Christchurch quite different to sleepy Masterton, says Pip. “As well as being a good preacher, he was expected to give weekly lectures on subjects such as Geology and Astronomy, and make personal calls to the parishioners’ homes. He provided incredible pastoral care throughout World War I and later, the Spanish flu outbreak.” 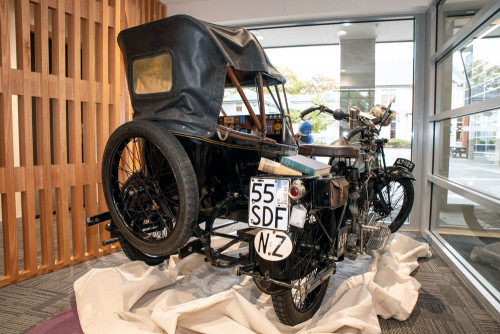 Soon after his induction in Christchurch, an old document was found from the Commissioner of Crown Lands allocating three acres of land to the Scottish settlers for a church and school. This led to Thompson developing a ‘blueprint’ for a Presbyterian boys’ school, which he presented to other church leaders, including Dr Erwin, of Knox Church, and which was unanimously approved in December 1916.

Rev. Thompson vacated the manse in Addington, and St Andrew’s College, a ‘Preparatory and Secondary Day and Boarding School for Boys’ was established. A series of events led to the College’s move to Strowan. Rev. Thompson, assisted by his friend and parishioner, Charles McCrostie had been ‘wooing’ parishioners and gathering small donations. A $5000 bequeath from the generous North Canterbury run-holder, Duncan Rutherford, coincided with the Stead family putting their property ‘Strowan Park’ on the market.

Rev. Thompson made a complete reconnaissance of the property on his motorbike, saying in his memoir, “I even crept by stealth, on foot, down the entrance drive and by the terraced stream with its lovely overarching trees, which, in my mind, I dubbed ‘the poet’s walk’. I came to the conclusion, which I have held through all years since: ‘There is only one place for St Andrew’s College, and that is Strowan’.”

The purchase was completed in late 1917, and ever since, thousands of people have been woven into the College’s rich history.

Rev. Thompson left Christchurch in 1919, but St Andrew’s remained a significant part of his life. A few years before he died in 1956, his family donated a portrait of him to the College, says Pip. “When we look at this rather stern portrait of Rev. Thompson on the landing in Strowan House, there is only a small hint of the amazing man he was. His personal life was marked with grief and loss, and his health was always poorly, yet he was hardworking, compassionate and kind, with his faith in and his devotion to God, Presbyterianism and St Andrew’s College remaining his enduring legacy.” 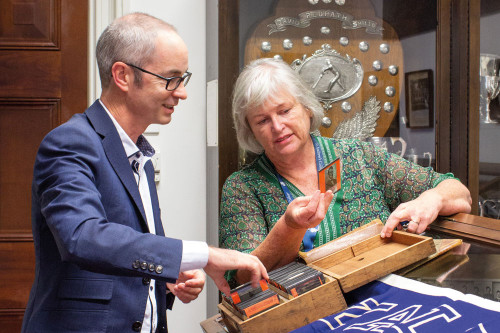 A wonderful display in The Green Library and Innovation Centre honoured the founder of the College, Rev. A T Thompson.