Why StAC< Latest News< Honouring the past 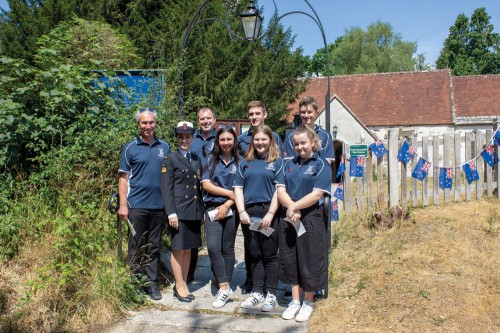 History came alive for Year 13 students, Jack Calvert, Augustus Galbraith, Aimee Bonniface, Kate McMillan, and Jasmine Lawn in the July holidays, when they visited the village of Brockenhurst, in the New Forest, England, to present their research commemorating the end of the First World War.

In the summer of 1916, the No 1 New Zealand General Hospital was set up in Brockenhurst, which included a large field hospital, and three hotels which were requisitioned for the purpose. By 1919, 23,000 patients had been treated in the village, with 93 New Zealanders buried in the nearby graveyard at St Nicholas Church. An impressive memorial cross was erected in the graveyard in 1927 to honour their sacrifice.

Each student researched a New Zealand soldier from the First World War who was connected to Brockenhurst or Christchurch. They presented a copy of their research to the Christchurch RSA before leaving for the United Kingdom to do the same with a group of volunteers at Brockenhurst who are preserving the village’s history. Jasmine Lawn researched her great-grandfather, Robert Parata, who incredibly survived the Western Front, Gallipoli and Passchendaele, before returning to New Zealand, marrying and having 10 children.

The Global Education Tour was led by Head of Travel and Tourism, Ian Morrison, and was accompanied by former Old Collegians Association President, Nick Letham (OC 2001). The tour group also visited key historical sites in London and spent several days in Italy, where they travelled through the canals in Venice, and visited St Peter’s Basilica in Rome.

They were joined for their special day at Brockenhurst by Rebecca Nelson, the New Zealand Royal Navy’s official singer, who sang a beautiful rendition of God Defend New Zealand as the group laid a wreath in front of the memorial cross in the graveyard. She also sang the Lord’s Prayer in Māori inside St Nicholas Church during the presentation of the research to the Brockenhurst volunteers. The group also laid poppies on the graves of each of the fallen New Zealand soldiers. “Our research meant so much more when we were able to visit the site of the hospital, hotels and church at Brockenhurst, and to see the graveyards of the New Zealand soldiers,” says Jack Calvert.

Ian Morrison says although thousands of soldiers were treated at Brockenhurst, few hospital records remain, and there is only sketchy information available in the public domain. “I personally committed to this project four years ago and hope to keep taking small groups of student researchers back each year, so that we can continue to provide information for the church and community, and the thousands of Kiwis who make the pilgrimage to Brockenhurst every year.”

History came alive for five Year 13 students when they visited the village of Brockenhurst, in the New Forest, England, to present their research commemorating the end of the First World War.