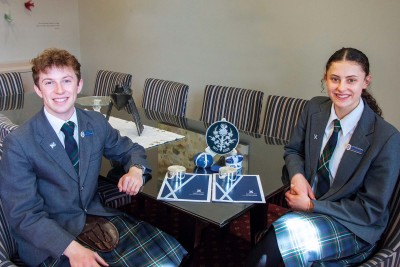 Oscar Bloom and Isabella Galvan (both Year 13) were unable to travel to Scotland as Robert Burns Scottish Scholars due to COVID-19.

With COVID-19 putting an end to the hopes of Isabella Galvan and Oscar Bloom (both Year 13) travelling to Scotland as Robert Burns Scottish Scholars in 2020, and 2021, a tour of Presbyterian schools in New Zealand was put in place instead.

Unfortunately, the latest Alert Level restrictions put paid to this full experience as well. Instead, in late September, Isabella embarked on a mini six-day tour of two Presbyterian girls’ schools, Columba College in Dunedin, and Iona College in Hastings. “I was certainly gutted that I didn’t get to go to Scotland but that’s just the way that things happen sometimes. I was very grateful and excited that a smaller trip within Aotearoa was organised. It wasn’t quite Scotland, but it was still an awesome trip which provided many different opportunities and learning experiences.”

At Columba College, Isabella was hosted by the Head Girl and ‘her lovely family’. She spoke to the staff and student leaders, and during the day, took part in classes and joined in some extra-curricular activities.

“My time at Iona College in Hawke’s Bay was spent doing relatively similar things. I attended my usual timetable classes for two days and also spent a day doing subjects that I don’t normally do, such as Art Painting, Geography, Physical Education, and Design. This made for an interesting, exciting, and refreshing day. At Iona, I spoke in chapel and was hosted in the boarding house by the Head of Boarding, which was another fun, new experience for me.” 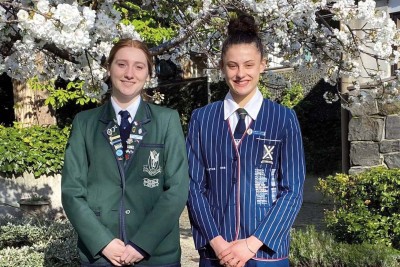 Isabella Galvan (Year 13) with a student at Columba College, Dunedin.

Both Iona and Columba College have strong Presbyterian foundations and were founded at a similar time to St Andrew’s College, says Isabella. “For this reason, they too have a rich history.”

One of Isabella’s highlights was experiencing the boarding environment for the first time. “I really enjoyed the good food, the camaraderie, and the independence that it offered. As Year 13 students, we were flatting in an apartment with six others, living independently and organising ourselves.”

Other highlights included meeting lots of new people, experiencing new ways of doing things, and visiting new schools. “I enjoyed the challenge of developing my ability to speak off the cuff and deliver impromptu speeches.”

One thing Isabella wasn’t so keen on was flying from Dunedin to Christchurch in gale force winds. “The wind on the ground in Christchurch was so strong that once we did manage to land, we were held on the plane for 50 minutes before disembarking as it was a deemed a health and safety hazard to get off!”

Oscar Bloom was disappointed but philosophical about not to having the opportunity to travel to Scotland. “I was disappointed, but it’s important to put these things into perspective. It would have been a privilege to go on the trip, however so many people have lost their basic necessities and loved ones due to COVID-19. Our loss was just the 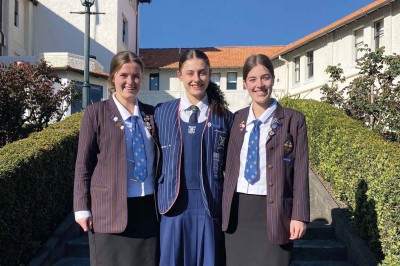 nature of the beast with the pandemic. It has been an honour to have this Scholarship and I know Izzy and I have been extremely grateful to go through the whole process and receive the incredibly kind gifts we did at the end.”

With COVID-19 putting an end to the hopes of Isabella Galvan and Oscar Bloom (both Year 13) travelling to Scotland as Robert Burns Scottish Scholars in 2020, and 2021, a tour of Presbyterian schools in New Zealand was put in place instead.