How very appropriate that the final ever show performed in the Theatrette, was called Curtains. This high-energy, toe-tapping, and often hilarious Tony-nominated show, was performed by an exuberant Middle School cast, who engaged their audience from beginning to end. 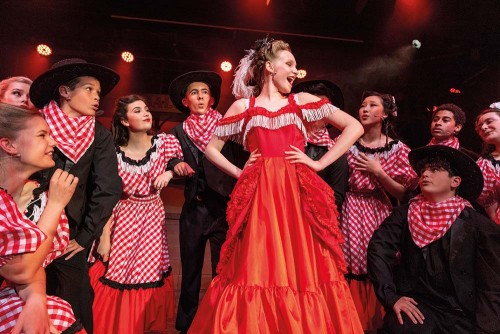 The show harks back to old-school style musicals and is a send up of many of the old murder mysteries, with lots of twists and turns. During opening night of an ill-fated show, Robbin’ Hood of the Old West, a star is murdered, and all of the cast and crew become suspects. Lieutenant Frank Cioffi, a police detective who moonlights in musical theatre, must save the show, solve the case, and maybe even find love, all without getting himself killed.

Curtains was another St Andrew’s production disrupted by COVID-19. The cast had to rehearse for four weeks online during the lockdown, and because of Alert Level restrictions, were unable to play to a full house. However, Director, Ginnie Thorner, said the determined cast of Year 9–10 students rose to the challenge. “It was an extraordinary task for them to catch up on the missed rehearsals. I am so impressed by what they achieved. For many, this is where their love of theatre begins.”

The creative set by Paul McCaffrey and over 100 spectacular costumes designed by Sylvia Campbell created a magical world for the actors. Musical Director, Duncan Ferguson put in another stellar performance. He not only played the two-and-a-half hour shows each night, but rehearsed the soloists, choir, and band, and trained the sound team. He is Musical Director for two productions each year at St Andrew’s which is highly unusual at a secondary school.

A dedicated technical crew, and team of supportive friends and parents, also did their part to create another highly memorable show at St Andrew’s College. 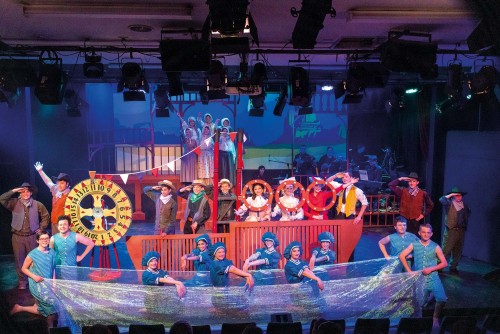 The young cast of Curtains did a fantastic job of pulling off this complex show, which is at the same time a classic ‘whodunnit’, a musical within a musical, and has lots of in-jokes and puns about the world of ‘showbiz’.

Jack Flanagan (Year 10) did a brilliant job as fast-talking Lieutenant Frank Cioffi, particularly in the funny scenes where his love for musical theatre, and his growing attraction for cast member, Niki Harris (Jenna Howell – Year 10), took over his real job of solving the crime. He also has a great singing voice. Jenna Howell shone in the role of Niki, superbly evoking the character’s sweetness, and naivety, but leaving the question about whether she might be just a bit too innocent?

Two of the strongest actors and singers were Xanthe Pearce and Edward Pitts (both Year 10) who played estranged songwriting husband and wife, Georgia Hendricks and Aaron Fox. Their powerhouse vocals were evident in their solos, and their moving duet, Thinking of Him/I Miss the Music, was one of the show’s highlights.

Sassy producer, Carmen Bernstein (Alexandra Shepherd – Year 10) and fussy, narcissistic director, Christopher Belling (Tamaroa Connelly – Year 10) had some of the funniest lines in the show, which they delivered with absolute relish. Alexandra also impressed vocally, while Tamaroa stole just about every scene he was in.

Chantelle Xiong (Year 10) is another talented singer and dancer, who was great as Carmen’s beleaguered daughter Bambi Bernét, while Noah Grossmith (Year 10) did a great job as journalist and theatre critic Daryl Grady, Jack Satterthwaite (Year 10) impressed as Bobby Pepper the choreographer and leading man of Robbin’ Hood, and Grace Kempthorne (Year 10) was excellent as stage manager Joanie Harmon. Others to shine were Ethan Higgs (Year 9) as Carmen’s husband Sidney Bernstein, Matthew Lee (Year 10) as the show’s financier Oscar Shapiro, Miah Taylor (Year 10) who was hilarious in her brief appearance as the first murder victim Jessica Cranshaw, Jake Elvidge (Year 9) who had great comic timing delivering his lines as Sasha Iljinksey, and Hugo Ranken (Year 10) who had fun playing Detective O’Farrell.

The large chorus also had lots of fun, and beautifully sung the big production numbers, sometimes in four-part harmony. Highlights included the hilarious, The Woman’s Dead, and In the Same Boat Completed.

Curtains was a great show, and a wonderful, upbeat final note on which to farewell the Theatrette.

Curtains was a great show, and a wonderful, upbeat final note on which to farewell the Theatrette.