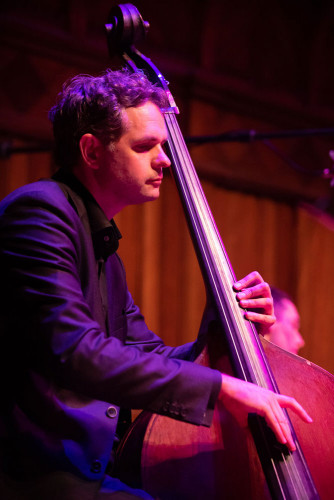 Head of Music at St Andrew’s College, Duncan Ferguson, says it is a “huge honour” to be named as one of three finalists for the second annual Music Teacher of the Year | Kaiarahi Puoro o te Tau Tui Award. More than 200 nominations were received for the award, which recognises the incredible impact Music teachers have on their students and the local community. “There is a large number of Music teachers all over New Zealand, so I’m surprised that I have received this. I also feel really pleased that the hard work I do at St Andrew’s College and for the Music teaching community has been honoured.”

Duncan, who is in his tenth year at St Andrew’s, manages 30 flourishing co-curricular groups comprising around 140 students, who participate in a wide range of music genres, from orchestra and chamber music to jazz, rock and electronica.

This year, under his stewardship, a chamber group from the College, named Quartetto Maduro, made it all the way to the national finals of the 2019 New Zealand Chamber Music Competition, placing them in the top six in the country. St Andrew’s also entered 10 bands in this year’s Rockquest, the most of any Christchurch school, with the College’s Preparatory School Band, called Black Wired, winning the national final of Bandquest. A strong orchestral programme at St Andrew’s College is another strength, encompassing around 60 students a year. In 2018, St Andrew’s won Best Big Band at the National Youth Jazz Competition, and this year, won the Southern Jam Youth Jazz Festival for the sixth time. “We are not just a classical school, or a rock school, or a technology school, we are all of those and so much more,” says Duncan.

One of the College’s most highly accomplished musicians, Jin Ju (Victoria) Lee (Year 13) says Duncan is deserving of the award because of his dedication and passion for his Music students. “He never hesitates to sacrifice his own time for the benefit of his students, and strives to provide us with the best equipment, best education and the best opportunities for us to dive deep into the world of music.” She says she enjoys the way in which Duncan guides and supports students to compose their own music. “He always encourages us to try new things. We have discovered what we are truly capable of creating for ourselves, which we may never have known if it wasn’t for Mr Ferguson.”

Cultural Captain, Hana Pearce (Year 13), says as well as learning Music theory and how to use various equipment, Duncan also teaches students how to be good performers. “He is a wonderful Music teacher, who is so passionate about the subject and getting every student to achieve their full potential.”

Duncan is also thankful for the opportunities he has had to work with other teachers at conferences, workshops and through his work with NZQA. “I am excited for the future of Music education in New Zealand, and I relish the opportunity to influence how we deliver it to make sure that all musicians and all genres are equally valued.”

The 2019 Music Teacher of the Year (Tui) Award will be announced in November at the Vodafone New Zealand Music Awards Artisan Awards, to be held at Massey University in Wellington.

Head of Music at St Andrew’s College, Duncan Ferguson, says it is a “huge honour” to be named as one of three finalists for the second annual Music Teacher of the Year | Kaiarahi Puoro o te Tau Tui Award.