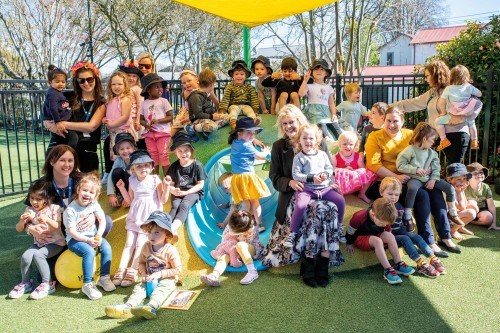 “The children were excited to celebrate with balloons and special individual cupcakes. Two of our children, Finlayson (Finn) Holley-Hill and Coco Boock-Walker, joined with Principal of the Preparatory School, Jonathan Bierwirth, to cut a delicious birthday cake. This small event was a lovely way to honour the Pre-school’s longstanding support of our tamariki and families as they start their learning journey at St Andrew’s College,” says Head of Pre-school, Phillipa Stephens.

The Pre-school opened in 2000, but it was back in 1996 that an Old Collegian first proposed the idea of a purpose-built pre-school at St Andrew’s, says Jonathan. “I had only been in my role as Principal of Preparatory School for a few months when Board Chair, Brian Gargiulo, asked if I would investigate whether or not it was a good idea. The following year, I started working on a big strategic plan with staff, and it was apparent that a co-educational pre-school was indeed a logical progression for the College, to both service our St Andrew’s community and boost co-education in the Preparatory School, where we had only a sprinkling of girls at the time.”

Jonathan started the project from scratch and enlisted the help of Beverley Rose, who was from a Montessori background. “After working with Beverley for a couple of months, I managed to convince her to take up the role as the first Head of Pre-school. About four months before the Pre-school was due to open she did all the paperwork to get us ready for day one. Marilyn Hawkins from the Ministry of Education was also a great help in getting everything across the line.”

The original, purpose-built Pre-school, designed by Wilke and Bruce, was constructed on top of a tennis court, adjacent to the Junior School. “The Pre-school was originally supposed to be in one of the tutor’s houses on Normans Road, but I always believed it needed to be situated next to the Junior School. It was a lovely little building, and on the day we opened, there were already 30 children enrolled.”

Jonathan says some of the best elements of Montessori, and fun free play based activities and inquiry time, were morphed to create St Andrew’s unique style of Pre-school education.

During her 16 years as Head of Pre-school, Beverley was much-loved by the children and known for providing a safe, happy, and calm environment. She left St Andrew’s at the end of 2016 to pursue her love of flying.

The youngest members of the St Andrew’s College community enjoyed a very special 21st birthday celebration of the Pre-school.