Why StAC< Latest News< Problem solvers second in the world

Problem solvers second in the world 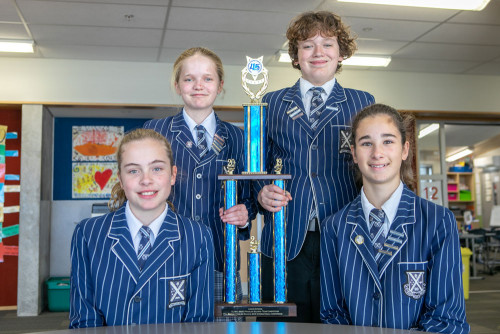 A group of Year 8 future problem solvers from St Andrew’s College, Megan Simpson, Isobel Forsey, Tama Connelly and Olivia Burdon, have proved their critical thinking skills are up there with the best in the world, finishing an incredible second place in the Junior Division at the Future Problem Solving International Final, held at the University of Massachusetts, United States of America, in June.

St Andrew’s was represented by a second Year 8 team (Chantelle Xiong, Carter Rhodes, Victor Sherborne and William Bainbridge-Smith), and a Year 9 team (Lachlan Odlin, Luke Wylie, Portia Bennie and William Russell) at the event, which also qualified for the international competition at the Future Problem Solving nationals in Auckland, last November. The teams competed in the Global Issues Problem Solving section and had to consider a scenario set some 30 years into the future, based on the topic of de-extinction, or the process of resurrecting a species which had become extinct.

During the competition, the teams were given a five-step booklet, which they had to complete in two hours. This included identifying 16 challenges to do with the scene identified in the booklet, deciding on the main underlying problem, and coming up with 16 solutions to solve it. The students then had three hours to write and practise a four minute drama based on their action plan. 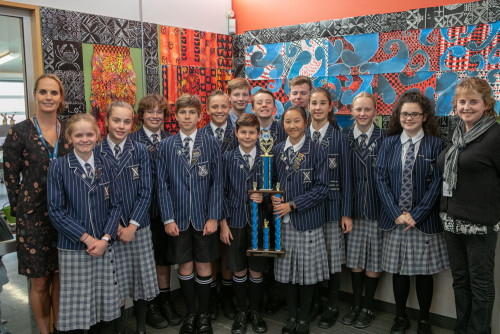 All three teams made the final round of marking in Massachusetts, which is difficult to achieve. The second
Year 8 team finished eleventh in the Junior Division, while the Year 9 team placed fourteenth in the Middle Division. These were outstanding results, given that the students were up against more than 2500 problem solvers from over 13 countries, all striving to apply their critical thinking and problem solving skills to hypothetical future situations.

Head of Learning Enrichment in the Preparatory School at St Andrew’s College, Kelly McBride, who accompanied the students, along with Head of Teaching and Learning in the Preparatory School, Vicki Pettit, says the results, particularly the second place-getters, were outstanding. “All of the students put in an incredible amount of work with their coach, Julie Rogers, over many months, who did an incredible job of preparing them for the competition.” St Andrew’s College Future Problem Solving coach, Julie Rogers, was delighted with the results, and says de-extinction was a particularly demanding topic for such young students. “They had to get their head around a considerable amount of science and technology and develop that science into a potential scenario set in the future. The students worked incredibly hard during lessons and in their own time to prepare for the competition. To have performed like that on the world stage was a wonderful achievement, which validates our visionary Future Problem Solvers programme at St Andrew’s College and our belief in the students.”

She says the benefits of Future Problem Solving extend far beyond the competition. “The skills students learn in the programme can be applied across all areas of their academic learning.”

A group of Year 8 future problem solvers are up there with the best in the world, finishing an incredible second place in the Junior Division at the Future Problem Solving International Final.