Rector Christine Leighton says the outstanding success of St Andrew’s College students at the 2018 New Zealand Scholarship examinations is something to be celebrated.

"To have one St Andrew’s College student in the top 11 in New Zealand, three in the top 50, and one student achieving the highest mark in New Zealand in her subject is an incredible result. We are proud of these amazing young scholars, and all the other students who worked so hard to gain these scholarship awards. The results are also testament to the capability and hard work of some of our very special teachers here at St Andrew’s College.”

Between them, 21 Year 13 students, two Year 12 students, and one Year 11 student from 2018, achieved 43 Scholarships, including 13 Outstanding Scholarships.

The College’s 2018 Dux, Russell Boey received six Scholarships, with five at Outstanding level. These achievements capped off an amazing year for Russell, a multi-talented academic, who was one of four New Zealand students selected to take part in the 50th Chemistry Olympiad in Bratislava and Prague last year, where he won a bronze medal. “I definitely wasn’t expecting to receive five Outstanding Scholarships, so it was great. I was also excited to become Dux, as it was a goal I had been working towards for nine years. One of my happiest moments was standing on stage at Prizegiving, holding the cup and receiving three cheers.”

At the Academic Assembly, Russell delivered an extremely well received speech, in which he encouraged students to follow their dreams and not someone else’s dream, and to find their passion and turn this into their lifetime’s work.

Russell is studying Physics at Auckland University this year with his overall goal to go into astrophysics, and hopefully complete a PhD in that subject.

Two other Year 13 students, Zachary Scheiwe, and Qiunan (Velia) Men, both achieved five scholarships, including one Outstanding Scholarship each, and won a place in the top 50 students nationwide.

Zachary, who was awarded Proxime Accessit (runner-up to the Dux) at Prizegiving, said a number of teachers played a big part in his success and that of the other scholarship students. “I’d like to give a huge thank you to the scholarship teachers who went above and beyond. Mr Brocklehurst was an unsung hero, turning up in the holidays to take the whole class, not just me.”

Zachary has joined Russell at Auckland University, where he is studying Mathematics, with a minor in Physics. His current plans are to enter either the engineering or finance sectors.

Another Year 13 student, Amy Wells, finished as the top Agriculture and Horticulture student in New Zealand, and won two additional scholarships – the South Island Agricultural Field Days Scholarship, and the prestigious DairyNZ Scholarship. “I came in from milking the cows to receive the news and was completely over the moon. I’d put a lot of work in with Mrs Cloughley over the last two years, so it was incredibly exciting to get that result. I’m so grateful to St Andrew’s College for all their support and the opportunities I’ve had throughout the years.”

Amy is studying Environmental Science at Lincoln University and hopes to use her studies to benefit the agricultural and dairy industries, particularly around waterway quality and soil science. 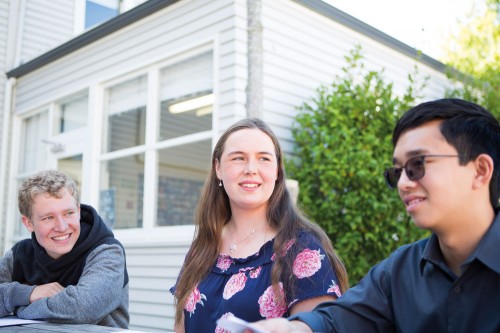 Rector Christine Leighton says the outstanding success of St Andrew’s College students at the 2018 New Zealand Scholarship examinations is something to be celebrated.