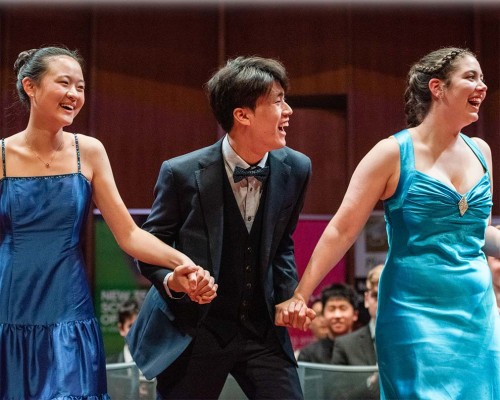 The trio were surprised and delighted when they were announced as the winners, following their virtuoso performance of Dmitri Shostakovich’s Piano Trio No 2, a powerful and moving piece, rarely attempted by musicians so young.

Just before their finale performance, Christine Jeon’s cello tumbled from its case, with the impact snapping its neck. She was able to borrow a cello from a guest performer and had just 20 minutes to practice on the completely new and larger sized instrument before they performed. Despite the setback, the performers left everything on the stage, with their spectacular finale seeing them crowned the winners.

It was the first ever win in the contest for St Andrew’s College and was a fitting result for exceptional pianist, Samuel Jeon, who has made the national semi-finals or finals of New Zealand’s most celebrated chamber music competition five years in a row. To finally win on his last attempt, meant so much, he says. “I was so scared the night of the finals until I thought, it’s my last time, let’s just go out there and have fun. Everything was a blur when our names were announced, and I was trying not to fall over with excitement. I knew we had given a really emotional performance, winning was a dream come true.”

Christine also felt the pressure before the finals, knowing it was Samuel’s last chance, but on the day managed to keep incredibly calm, even when her cello broke. “I had been nervous beforehand, but once my cello broke, the nerves completely disappeared. I knew it would be the last time I would get to perform with Sam in the Chamber Music Contest and wanted to have fun and do the best I could for the group.”

Violinist, Grace Lawrence, was also ecstatic with the win, and says like at all awards shows, she was ‘trying to look diplomatic’ as the trio waited for the result, so she wouldn’t look too upset if someone else’s name was read out. “It took a moment for me to realise it was us, and it was so exciting. The win is huge for me, as I’d been considering studying Music once I leave school but wasn’t sure if it’s what I wanted to do. This could be the moment that helps me to decide, so the win is really meaningful.”

All three of the talented young performers are Music scholars at St Andrew’s College, and have achieved so much together in the Chamber Music Contest. Samuel and Grace were part of Quartetto Maduro, which made the national final (top six in New Zealand) in 2019. Incredibly, Samuel and Christine were part of another trio, Babarians, with a student from Christ’s College, which also made the national final this year.

Both groups progressed through the Christchurch District, Canterbury District and Regional finals to qualify for the national finals.

At the Cultural Assembly in August, the students each received the Rector’s Medal – the first students to receive this significant recognition of achievement. “We are so proud of Samuel, Grace and Christine for their incredible achievement. This is a great moment for them personally, and for St Andrew’s College music. We also congratulate Mark Hodgkinson and the other staff offering tuition, guidance, and support to these committed, outstanding young musicians,” says Rector Christine Leighton.