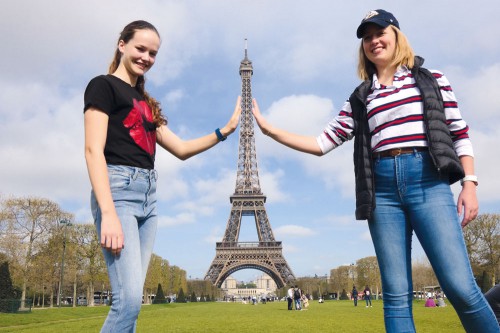 Fabulous French culture, traditions, architecture, food, and language were brought to life for a group of 23 Year 11–12 Languages students and three staff members, when they spent 18 days exploring France in the Term 1 holidays.

Their journey took them from Paris to Rouen via Giverny, then on to Normandy, Tours, Carcassonne, Nîmes and Nice. Highlights included night views of Paris from the Eiffel Tower, overnighting in a fortified medieval city, wandering through Monet’s gardens in spring, and swimming in the Mediterranean. “Paris was mind-blowing for the students. We explored on foot and averaged around 28,000 steps each day as we visited the city’s main attractions,” says French teacher, Angela Marshall, who organised the tour. Other staff members to accompany the group were French teacher and Year 12 Dean, Bronwyn Radcliffe, and Materials Technology teacher, John Hamilton, who did French lessons before the trip, and during its course enlightened students about many aspects of history and architecture.

While in Paris, the group met up with Daniel Maier-Gant (OC 2014) who was living in an apartment, and studying Law and Politics at Université Sciences Po, on exchange from the University of Auckland. “Meeting Daniel was a highlight of the trip for many of our students. He showed us around parts of Paris we otherwise wouldn’t have seen, including multicultural areas where students hang out. He also organised a wonderful dinner back in the city for our last night of the tour.”

Another highlight was the four-night homestay in Rouen, where students attended French lessons at a language school and visited local sights, says Bronwyn. “This part of the tour was a wonderful opportunity for our students to practise their language skills and get an insight into French family life.”

Visiting the D-Day beaches and Memorial Museum for Peace in Normandy was a moving experience for the students, who also enjoyed visiting Bayeux, and seeing the famous tapestry, made during the 11th century.

Exploring Château of Chenonceau and Château de Chambord in the Loire Valley, staying in a medieval walled city in Carcassonne, exploring Roman heritage at Arles, and watching Spartacus, the annual re-enactment of the Roman games in the 2000-yearold arena at Nîmes, were other highlights of the group’s busy itinerary. A guided tour of Nice, a visit to the market and the old part of town, and a swim in the Mediterranean capped off an amazing tour, before it was back to Paris, and home to New Zealand.

Bronwyn says the tour was a great experience, which provided full cultural immersion, and helped to develop the students’ language skills and independence. “Meeting Daniel also gave the students an insight into the application of the French language beyond school. The trip has inspired some of them to possibly follow in his footsteps.”

Fabulous French culture, traditions, architecture, food, and language were brought to life for a group of Languages students and staff exploring France.