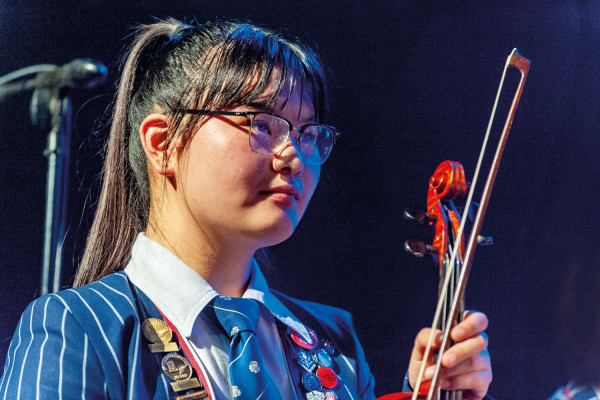 During her five years at St Andrew’s College, Jin Ju (Victoria) Lee has been a humble and gracious scholarship student, who has demonstrated exceptional musical talent, which has seen her recognised on the national, and even the international stage. The multi-instrumentalist is especially well known for playing the violin, with her biggest achievement to date, being selected as one of 80 students from around the world to perform with the 2018 International Honors String Orchestra at Carnegie Hall in New York. Victoria’s achievements in 2019 were equally impressive. She was named as Concert Master of the New Zealand Secondary Schools’ Orchestra, performed as a soloist with the Canterbury Philharmonia Orchestra, and was the leader of St Andrew’s College’s chamber music group, Quartetto Maduro, which finished in the top six at the New Zealand Chamber Music Contest. Victoria’s incredible musical talents also extend to jazz and pop. She won Best Bassist at Southern Jam as part of a College ensemble, won the Ara Songwriting competition with her original electronic pop song, Me to You, and was Assistant Music Director for the senior production, Parade, for which she also played viola. As a College prefect, Victoria exhibited leadership in all her interactions with staff and students, and in Year 13, was the recipient of a student-initiated character award, recognising her humility and perseverance. Victoria came to St Andrew’s College on a music and academic scholarship in 2015, and says the College, and particularly its Music Department, has positively influenced every aspect of her life. In 2020, Victoria plans to study Health Sciences at Otago University, with a goal to one day be part of the New Zealand Doctors’ Orchestra.