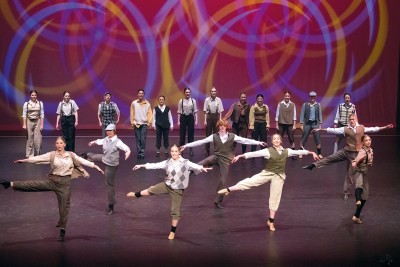 The Senior ballet dancers performed wonderfully at the Dancing Like the Stars event. Held at the Isaac Theatre Royal, they wowed the audience with their dynamic dance from the Broadway hit Newsies.

Holly Hembry (Year 7) competed at the New Zealand One Dance Ballroom Dancing Championships. Over two days, she danced 24 events, with 16 wins three seconds and two third placings. She also won the Champion of Champions trophies in both the Pre-Teen (12 years and under) and Teen (16 years and under) age groups. At the combined 2022 Kiwi Classic and 2021 Aotearoa New Zealand Championships in Auckland over Matariki weekend, Holly won seven solo national titles, placing second in her other two events. On the Saturday she competed in the Pro/Am Latin competition partnered by Enrique Johns from Dancing with the Stars. They won all five of their events.

Following six sessions in the Canterbury District Round of the New Zealand Chamber Music Contest, two trios made it through to the District Final. They were the piano trio, 8 Strings 88 Keys (Miu Kim and Jasmine Hooker (Year 10) with Sea-am Thompson (Year 11)), and The Berlin Trio, which also includes Jasmine Hooker and former Preparatory School student Ryan Gu. The Berlin Trio went on to win the District Final, which put them automatically through to the Southern Regional Finals where they came second and are now through to the National Finals. This is the fourth year in a row a St Andrew’s student features in the NZCT National Finals.

Estee Wilke (Year 13) performed with the New Zealand Secondary Schools’ Choir in Wellington at the St Mary of Angels Church, the ANZAC Dawn Service at the Wellington War Memorial, and in other performances at Paraparaumu. A fundraiser concert called Evening of Song was held for Estee in early June to help her raise funds for the National Secondary Schools’ Choir tour. 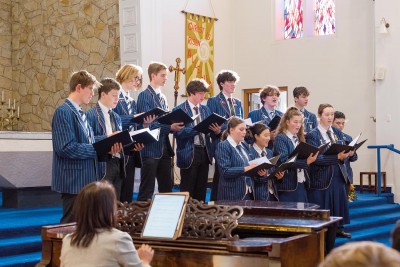 Choirs and classical groups, Stacchorus, Staccoro, VOX16, the Chamber Orchestra, and the two boys’ barbershop groups performed in a lunchtime concert at St Mary’s Pro Cathedral. They appreciated being able to perform in public after many disruptions due to COVID-19 restrictions, and their varied programme was enjoyed by the audience.

Orchestral students treated their audience to a wonderfully varied programme of music from the 16th to the 20th centuries, at their annual concert in the Centennial Chapel in early June. Groups performing were The Berlin Trio, 8 Strings 88 Keys, Preparatory School Ensemble, Chamber Orchestra, and the Symphony Orchestra. It was a great opportunity for the chamber groups to perform before they went into competition for the New Zealand Chamber
Music Competition.

The College’s piano trio, 8 Strings 88 Keys (Miu Kim, Jasmine Hooker (both Year 10) and Sea-am Thompson (Year 11)), performed at a lunchtime concert in the Ron Ball Studio at the Christchurch Town Hall, in June. 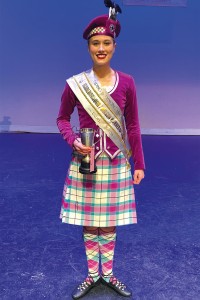 In the Top of the South Championships Milly won the Marlborough Nelson Championships U18 Years Irish Hornpipe, Reel O’Tulloch and Highland Reel, and was overall Runner-up Champion U18 Years. 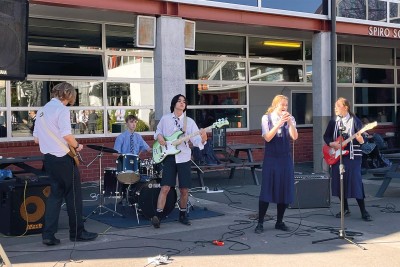 Afterglows performing during a 'Lunchtime in the Quad' concert.

Cultural Captains, Rachel Holyoake and Lucy Ojala, organised a Friday lunchtime programme called ‘Lunchtime in the Quad’ in honour of New Zealand Music Month in May. A number of College rock bands took part, including Black Wired, Afterglows, False Alarm, and High Voltage, who drew big crowds of student to the Quad to enjoy their fantastic performances.

As part of the College’s New Zealand Music Month celebration, there were also daily posts to the St Andrew’s College Music Department Facebook page, sharing work from current and past students, with lots of fantastic original pieces of music being shared from songwriters, jazz, classical, and rock musicians.

Grace Lawrence (Year 13) has once again placed as a top 5 finalist for the national Peace Song Competition from Play It Strange. She has won a recording session to the value of $750 to have her song professionally produced.

Year 9 student, Sam Foote, piped for the Rangi Ruru Girls’ School Founders’ Day Assembly, firstly piping guests in and then piping in the traditional cake during the service.

At the Otago Queen’s Birthday Piping Championships placegetters were:

On Sunday 3 July, members of the Pipe Band competed in the second indoor Highland Piping Society of Canterbury competition for 2022. First placegetters were:

The following Preparatory School students were selected into representative groups in the Christchurch Schools’ Music Festival.

Year 11 students Chantelle Xiong and Hayden Lam have both had their songs selected as finalists in the Play It Strange Youthtown Songwriting Competition, which is open to Year 9–11 students around the country. Play It Strange will now fund as their prize a professional recording session for Chantelle’s song Rain In My Soul and Hayden’s Remember. 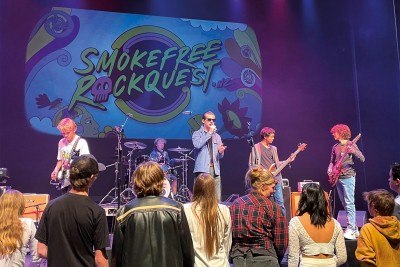 Eight St Andrew’s College bands and two solo acts competed at Rockquest, with two, Black Wired and Afterglows, going through to the regional finals. The audience appreciated the bands’ original songs and energetic performances. Cindy Xiong (Year 13) won the ‘Best use of electronic assist’ award for her clever use of electronic instruments during her performance.

Black Wired and Afterglows have since recorded songs for their video submission to the regional finals, with the help of Grant Robertson from The Light Site, and expert videoing by Hung Lam, father of Hayden (Year 11) and Ethan (Year 9), both members of Black Wired. Head of Music, Duncan Ferguson, mixed the tracks in the College’s recording studio.

We highlight the most recent Cultural Successes of our students.