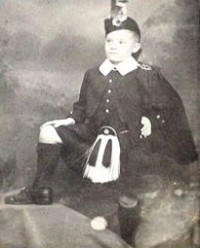 The College already celebrates one of Burns’ significant works, the Address to the Haggis on several occasions each year, including the Founders’ Day Assembly, many reunion dinners, the Ceilidh, and the special Leavers’ Dinner. It is proposed that Robert Burns Day also becomes a time when the College recognises more of the poet’s works.

To bring his vision to life, Rob has generously made a significant financial gift to St Andrew’s College. He was on hand at this year’s Founders’ Day Assembly to present the inaugural scholarships to Year 12 students, Hana Pearce and Lewis Edmond, who recently returned from their incredible Scottish adventure.

Rob is incredibly proud of his long Scottish family history on both sides. He was a member of the Canterbury Caledonian Society from the age of four, the same age he took up Highland dancing. Robert Burns has been part of Rob’s life since he was a young lad and his father used to quote Burns’ poems.

He still loves to delve into the poems today, and says it is hard to pick a favourite. “However, after seeing Rector Christine Leighton’s affinity to A Red, Red Rose, and hearing Hana Pearce’s most beautifully  composed and sung version of this poem, I would dare not have it at the top of my list.”

He says the further strengthening of Scottish heritage at St Andrew’s will be fostered with the introduction of ongoing programmes specialising in Robert Burns, starting in the Preparatory School. “In future, the Robert Burns Scottish Scholars, as part of their selection process, will have to exhibit in-depth knowledge of Robert Burns, which will be enhanced further during their visit to Scotland.”

The Middle School’s outstanding sold-out production of The Drowsy Chaperone, featured an incredibly talented all‑singing, all-dancing cast, which transported its appreciative audiences back to the heady Prohibition era of the late 1920s.