Why StAC< Latest News< Music in the spotlight 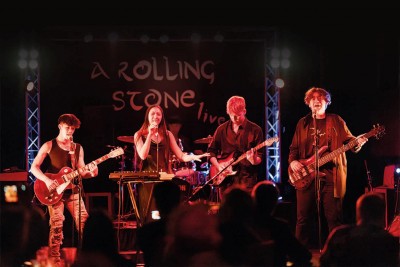 Black Wired performing at StAC Rock Night. The band went on to win the Battle of Bands Canterbury regional final against adult bands.

Music is a universal language with a powerful impact and is an integral part of life at St Andrew’s. From soaring classical and choral performances, to high energy rock bands, funky soul and jazz performers, and singer songwriters showcasing their latest work, the College community is regularly treated to students’ considerable talents.

Alongside understanding how music is put together and creating music, performance is a key pillar of the Music education programme at St Andrew’s, says Head of Music, Duncan Ferguson. “It’s important that every Music student experiences what it is like to perform in front of an audience of their peers, whether at an assembly, concert, special occasion, or even a competition.”

The overarching Music programme for students in Years 9–13 is largely the same, focused on the rudiments of music, songwriting and composition, development of aural and performance skills, and use of technology. What is different about the St Andrew’s programme is the individualised approach from Year 10 onwards, which looks at the style of music each student is motivated and excited by, and helps them to create in that genre, says Duncan. “We look at the music they love and initially recreate techniques of that genre until they become strong enough at the craft to create and produce their own interpretation in the music. As a result, many of our Year 13 students are already producing music to a professional level and working way beyond the requirements of NCEA.”

Music students create music both individually and collaboratively. Over the last two years, around a dozen St Andrew’s students have been funded by national organisation, Play It Strange, to attend specialist tutorials with producers. “This gives the students a huge insight into not only writing a song, but how to produce it to a level that could be put on Spotify or heard on the radio. Year 13 students, Grace Lawrence, who recently won the nationwide Play It Strange songwriting competition, and Cindy Xiong, who was runner-up for the lyric award in this competition, are great examples of students who are already producing songs at this level.”

Music students at St Andrew’s are always creating music in their genres, either individually or collaboratively, and are encouraged to work on a variety of creative projects during their studies, says Duncan. “We recently asked the Year 11 and 12 students to write a fun summer jam.”

Duncan says when students get to Year 13, they work on a project based on their own areas of learning and interest. “This final year is very much about putting all the various skills and strands they have developed into a big melting pot to percolate. The students are busy getting on with their own music and inspiration, but also still influence and learn off each other.”

With Duncan named New Zealand Music Teacher of the Year in 2019, and the College’s Music Suite featuring state-of-the-art recording equipment, opportunities for young musicians and singers at St Andrew’s have perhaps never been greater. The continued success of current and past students on both the national and international stage continues to put the highly regarded Music programme at St Andrew’s in the spotlight.