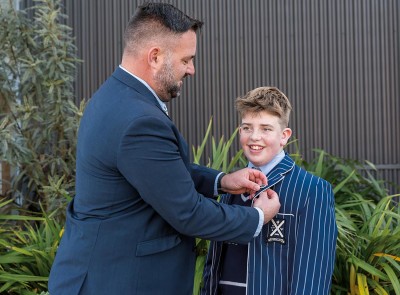 In 2021, boarders started to think about a new way they could be identified within the College, without adding to the many ties they already wear.

Work began on creating a whakatauki and symbol that could be used as a badge, and a constant visual reference and mantra for boarders.

2021 Head of Culture, Tamati Frost, along with Heads of Boarding, Sophie Innes and Jake Jackways, conceptualised the whakatauki, Te taki tino ma, and the symbol of two koru, which represent the College and the Boarding House wrapping around the boarder, who is at the heart of it all. “Loosely translated, the whakatauki means ‘the best lead the rest’. This is not a statement of arrogance or overconfidence, rather it is something we want all in our community to aspire to and live by. The intricate designs within the koru represent the individual backgrounds and journeys of our young people who make up our special community,” says Director of Boarding, Matt Parr.

The work, which started last year, has reached fruition in 2022. With the help of Moana MacDonald’s (Year 13) design skills and further development work by Head Graphic Designer, Craig Morgan, a stunning poster design has been created, with a simplified version being used for the new boarders’ badges, says Matt. “Every boarder has received a Te taki tino ma badge to wear on their blazer, which makes them instantly recognisable in the College. The badges also tie the three boarding houses together as one community.”

To cement the meaning of the whakatauki, a weekly Te taki tino ma gift certificate is being awarded to a boarder in each boarding house who has best demonstrated the values behind it. “There are no set criteria for the award – however ideally the boarder does something in the wider boarding community which shows they are leading the rest. Two of our first recipients were swimmer, Sophia Molnar (Year 11) who didn’t let a setback stop her from bouncing back and achieving, and James Scott (Year 10) for his outstanding consistent effort in Prep.” The weekly winners exchange their gift certificate with a $10.00 gift voucher.

The boarding team create a whakataukī and symbol to help convey their unique identity within the College.