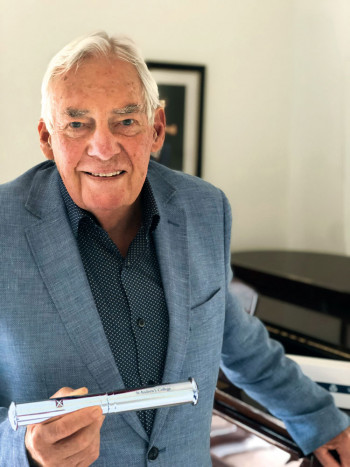 In 1990, Mr Sinclair visited several senior colleges in Australia to investigate the major implications for St Andrew’s College’s move into co–education and produced a useful and perceptive report for Dr Rentoul. He was instrumental in putting the introduction of female students into the Senior College in 1991 into action.

Mr Sinclair led the Senior College in 1991 and 1992, being responsible for curriculum, professional development and practical planning.  Throughout his tenure, he actively promoted the participation of students in sports, cultural and pastoral activities, something he was very passionate about.

By the end of 1996, Mr Sinclair relinquished the complex role of Deputy Rector to become the College’s Administration Manager and Board Secretary, from 1997–2000. His main tasks were to improve systems and enhance communication between teachers and support staff.

By the time of his retirement, Mr Sinclair had spent 18 years restructuring processes, overseeing changes, organising overseas tours, dealing with everything from budgets to buildings. Little happened at the College during his tenure without some input from John Sinclair.

Since his retirement, Mr Sinclair has continued his close association with St Andrew’s. For some years he organised the itinerary for Strowan Scholars’ trips to Scotland. He remains passionate about St Andrew’s College and is fondly regarded as a wonderful stalwart of the College community.

The John Sinclair Scholarship is to be awarded to students joining St Andrew’s College in Year 11 or above, who might otherwise not be able to attend, or remain at the College, but who, in the Rector’s assessment, are highly motivated to make a positive academic, sporting or cultural contribution to the College.

Please note, this scholarship is not by application. It will next be available for students who are in Year 11 or above in 2023.