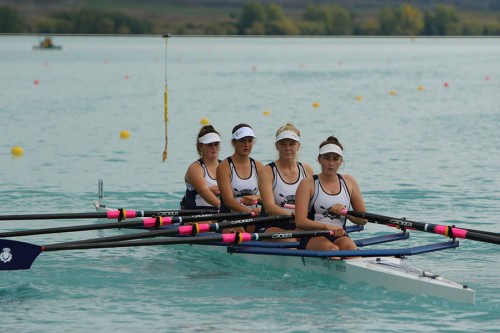 Rowing is a hugely rewarding sport which requires a great deal of commitment in both training and competition. It is an excellent way to improve fitness and strength as well as being an enjoyable team sport.

The St Andrew's College rowing team is incredibly supportive, yet highly competitive, with our crews consistently placing in the top 10 in New Zealand. In 2017 our senior boys’ won the prestigious Maadi Cup and Springbok Shield.

Rowing is open to all students from Years 9–13. No level of ability is required to begin, just enthusiasm. Students new to rowing must complete a ‘Learn to Row’ programme, which is offered in Term 1 and/or Term 3. The competitive season starts in September and runs until March.

Rowers begin with some small regattas, before progressing to four major regattas at Lake Ruataniwha. Maadi Cup, the national secondary schools rowing championship, is held in March in either Twizel at Lake Ruataniwha, or Cambridge at Lake Karapiro.

Our rowing programme is supported by top-level coaches, high quality boats, and an active parent committee, who assist with logistics and fundraises to help with costs. Competitive rowers are expected to train at least four times per week, which includes some gym work.

There are many benefits to being part of the rowing programme at St Andrew’s. Students can gain a high level of fitness, improve their time management skills, become more focused and self-reliant, and gain lifelong friendships.

With a combination of commitment, dedication and talent, they may even be highly competitive at national level. Some of our rowers have had the opportunity to be a part of a national rowing programme, and several of our Old Collegians are in the USA studying and rowing.

2017 was the most successful in the College’s rowing history, with our U18 eight crew winning the coveted Maadi Cup, the pinnacle of Secondary School rowing.

Our U18 coxed four won the Springbok Shield, the other glamour event at the regatta.

Two of our Year 13 rowers, Thomas Russel and Benjamin Taylor, were selected to represent New Zealand at the World Junior Rowing Championships in Lithuania, where they won a silver medal in the Junior Men’s Four.