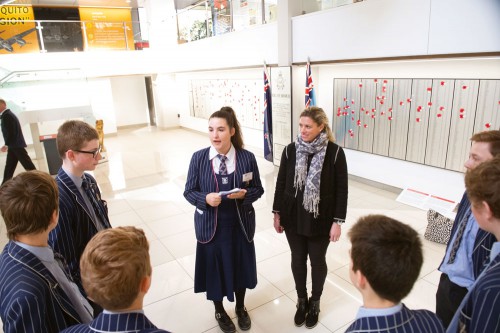 All Year 10 Social Studies classes, and two Year 9 English classes attended the exhibition at the Air Force Museum called Anne Frank; Let me be myself, which connected back to their studies on Human Rights, and Migration. The exhibition looked at themes of tolerance and prejudice from Nazi Germany, how those themes are still present today, and what can be done to make real change.

History and Classics teacher, Beka Roest, said it was a great opportunity for the students to learn more about the events of World War II and the Holocaust, along with the themes of identity and discrimination. “The exhibition asked each student to consider what they might do in similar circumstances. Would they be a bystander, and do nothing, or an upstander, who would try to effect change by standing up for another person’s human rights?”

‘‘The exhibition asked each student to consider what they might do in similar circumstances.’’
Beka Roest, History and Classics Teacher

The exhibition was created by the Anne Frank House in Amsterdam, and has been viewed by over 80 million people globally. It is touring New Zealand for the next three years and has been brought to Christchurch by the Holocaust Centre of New Zealand.

Year 12 History students were given the opportunity to act as guides for the various classroom visits. Meg Longley (Year 12) was one of the St Andrew’s students chosen for this role, and was given a full day’s training beforehand. “We learnt about the content of the exhibition and practised how we could actively engage the students by asking good questions. Then we learnt how to walk through the exhibition and did some simulations as guides.” Meg says the peer-to-peer teaching was ‘really cool’ and she was surprised by the reaction of some of the younger students to Anne Frank’s story. “It is a difficult story to hear, and had quite an impact on them.” 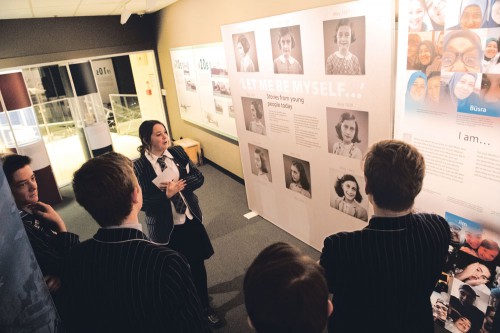 Several different artefacts were on display, including a copy of the red chequered diary Anne Frank received on her 13th birthday, an original yellow star Jews were forced to wear, and a special scale model, which gave an impression of what the secret annex looked like where Anne Frank and seven others hid from the Germans’.

Beka says the stories of today’s young people from various backgrounds, which featured in the exhibition, were also poignant. “One of the main messages was to make the connection between historical prejudice and discrimination and the students’ worlds now. The exhibition was a great chance to augment some of the learning in their Human Rights study, and asked them to consider some challenging ideas. Feedback overall from the students has been really positive. It was a great experience for them.”