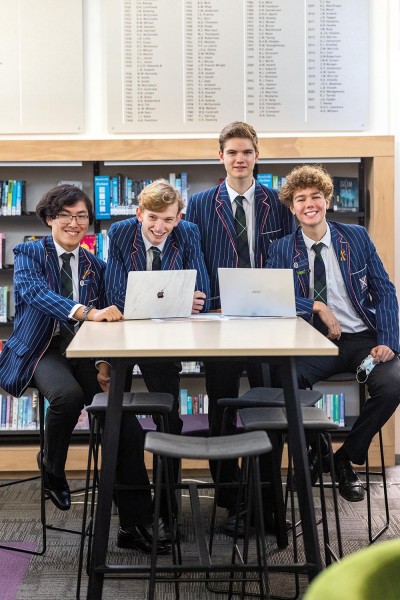 Four of St Andrew’s high achieving academics, Tom Edwards, Toby Harvie, Luke Zhu and Corin Simcock (all Year 13), are on top of the world, after winning one of only three Outstanding Team Awards presented at the International Mathematical Modeling Challenge (IM2C), making them the winners of this prestigious competition, alongside schools from Thailand and the USA.

This outstanding success follows the team’s win in the New Zealand round of the competition. This qualified them for the international event, where they competed against 56 other teams from 31 countries/regions around the world.

This outstanding success follows the team’s win in the New Zealand round of the competition. This qualified them for the international event, where they competed against 56 other teams from 31 countries/regions around the world.

All teams worked at their schools during a five-day period between March and May.

This year’s problem was ‘Aboard! Boarding and Disembarking a Plane’ which required the teams to develop a model for the most time-effective plane boarding and disembarking methods, and then submit a substantial report.

The students had a week away from school in Term 1 to compete in the competition, and their success in both the New Zealand and international rounds was fully deserved given the complexity of their project and the work they put into it, says Teacher in Charge of Digital Technologies, and Mathematics teacher, Phil Adams, who supported the boys throughout the project. “This year’s problem required them to come up with their own boarding and disembarking strategies for airplanes. They had to do comprehensive research to learn more about aircraft boarding algorithms, before identifying all the complicating variables. They took the approach of mathematically modelling the variables and the boarding process, then wrote a complex computer program in Python to run simulations of the boarding process over and over again. This enabled them to try different boarding strategies and see how they reacted to changing variables like the disobedience coefficient, passengers with carry-on luggage, or groups.”

Phil says after running thousands of trials and analysing the results, the students were able to settle on a strategy. “This took them five full days, including the time taken to produce a professional and polished report summarising their process and findings. They did an incredible job. This team’s creativity, team work, and mathematical skill makes them a standout. It will be exciting to see where they go to from here.”

Rector, Christine Leighton, was thrilled with the result. “These four boys are incredibly able and love an academic challenge. They were thrilled to win entry into the international competition but to be one of three teams in the world with an Outstanding Award  was beyond expectation. We are very proud of them.” The boys’ outstanding win resulted in national media attention, and after hearing a story about them on Radio New Zealand, Sir Ian Taylor invited them, and Mathematics teacher, Phil Adams, to be special guests at the prestigious New Zealand Hi-Tech Awards in early August, where they were recognised for their Outstanding Award. The team was also invited to present at the Air New Zealand headquarters in Auckland, where they will be given a tour and introduced to members of the software development group.