Why StAC< Latest News< Sports round up 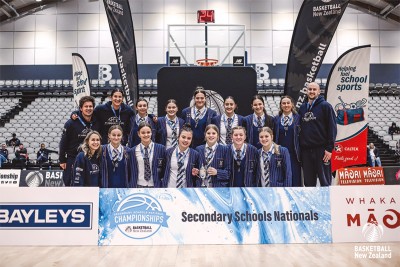 What an incredible season for the Girls’ Senior A basketball team, who for the first time in St Andrew’s College history, made it to the final of Basketball New Zealand's Secondary Schools’ National Championships, finishing runners-up to an impressive Westlake Girls’ High School team. The team played well throughout the competition, with win after win setting them up for a nail-biting semi-final against Tauranga Girls’ College, which they won 84–72 after an intense final quarter. Westlake Girls’ High School were fierce competitors in the final, with the final result going the opposition’s way in a high scoring match, 99–66. The girls had great support during the tournament, and acquitted themselves admirably on and off the court, playing with dedication, passion, and commitment. To cap off the great result, Madeline-Rose Morrow, Karereatua Williams (both Y13) and Kavanah Lene (Y12) made the NZSS Tournament Team.

Incredibly, this was the first loss for the team in three years. Prior to the national tournament, the Senior A girls had won the local 2022 Whelan Trophy Tournament, and the Zone 4 South Island Tournament (becoming South Island champions), defeating a tough Rangiora High School team in both hard-fought finals.

It was an end to a very successful season for St Andrew’s basketball, which continues to go from strength to strength under Basketball Co‑ordinator, Ben Eves. Nine of the College’s 27 basketball teams finished in the top three of their respective competitions which was a great result for the fast-growing programme.

It was another great netball season for St Andrew’s, with 12 teams playing in the Saturday Club Competition, with four teams making finals, two teams winning their competitions, and three teams competing in the Wednesday Secondary School Sport Competition. 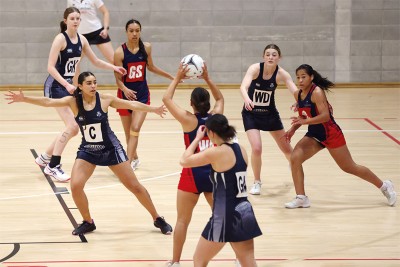 The St Andrew’s Senior A netball team in action at the nationals.

The Senior A team finished runners-up to St Margaret’s College in the Wednesday SuperNet Competition. After a fifth placing at the South Island Secondary Schools’ Tournament, the Senior A team qualified for the New Zealand Secondary Schools’ Netball Tournament. This tough competition is for the top 16 teams from throughout New Zealand, with 245 A school teams originally vying for a place during regional tournaments. The girls played with determination and pride, ending up in a playoff for eleventh and twelfth against Hasting Girls’ High School, which they lost in a tight game 29–34. This saw St Andrew’s finish in twelfth place nationally, equal to the best the College has ever achieved in this competition.

Local competition round up

It was a highly successful winter sports season for many other St Andrew’s sports teams, with several local, regional, and South Island titles won. A wrap up of local competitions follow below. See pages 44–45 for results from the South Island and national competitions held during Winter Tournament Week, where another highlight was the Boys’ 1st XI hockey finishing runners-up nationally at the Rankin Cup Tournament.

It was another fantastic year for football, with the Girls’ 1st XI and 2nd XI winning their regional titles back-to back for the first time, and the Girls’ 1st XI going on to finish fifth at the New Zealand Secondary Schools’ national tournament. In their regional final, the girls faced second ranked, Rangi Ruru Girls’ School, and won the match in a tense penalty shootout after the score was 0–0 at full time. The Boys’ Junior 1st XI and Blue team also made it to their regional finals, with the Boys’ 1st XI finishing fourth at the national Malcolm Cowie Tournament during Winter Tournament Week, their highest placing ever.

After winning the Canterbury Premier Secondary Schools’ Competition in a controlled 2–0 win in the final against old foes Timaru Boys’ High School, the Boys’ 1st XI hockey team was second at the prestigious Rankin Cup national tournament. Six out of the College’s 10 hockey teams played off for a top three placing in their regional competitions, with the Boys’ Blue team winning the Secondary Schools’ Division 4 Competition. 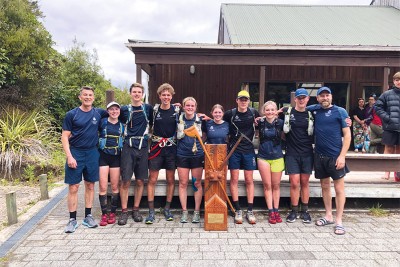 Two teams of four competed at the National Schools’ Adventure Racing event, GO-4-12 Challenge NZSSARC. The physically and mentally exhausting 12-hour event, consisted of an 18km mountain bike ride, a 9km run on a track, and another hour around a circuit with options including a rogaine on foot, mountain bike ride, and various bonus activities. The St Andrew’s Blue team of Jenna Hirschfeld (Y13), Payton Kimber-Reynolds (Y12), Elliot Graves (Y11) and Ethan Griffin (Y10) finished second in the Mixed team competition, and the St Andrew’s White team of Corin Simcock, Toby Harvie, Lucy Hamilton, and Charli Watts (all Y13) was third in the Mixed team competition.

A group of 41 Preparatory School students and nine teachers travelled to the AIMS Games in Tauranga. Every student performed well both on and off the pitch. The Boys’ hockey team finished 10th out of 22 teams, Girls’ hockey 12th out of 30 teams, football 40th out of 50 teams, and netball 48th out of 128 teams. The football team also contributed to cleaning up the Mount Maunganui Beach as part of AIMS Gives Back programme. 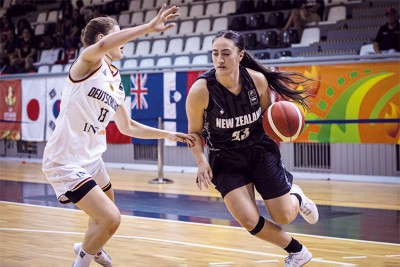 Karereatua Williams (Y13) was selected for the New Zealand U17 team, which qualified for the FIBA World Championships in Jordan, and took part in a round of games in Hungary. Karereatua had her best game against Slovenia, with 13 points, four rebounds, and two steals. She also represented Canterbury in the BBNZ U23 and D-League National Tournament.

Madeline-Rose Morrow (Y13) was selected for the New Zealand team to compete at the FIBA U18 Women’s Asian Championship 2022 Division A Competition.

Mitchell Corkery (Y12) played in the New Zealand 3×3 team at the FIBA 3×3 U17 Asia Cup. After losing to India in their first game, the team beat Uzbekistan, then faced Mongolia in the quarter-final, losing 21–6 and finishing sixth overall.

Mitchell Corkery and Jett Nicholson (both Y12) played in the Canterbury A Boys’ team which won the Basketball New Zealand U17 National Championships, making them national champions.

Carter Rhodes (Y11), Mitchell Corkery (Y12), Madeline-Rose Morrow and Karereatua Williams (both 13) were named as McDonald’s All Stars due to their high level of play within the Thomson and Whelan Trophy CBA competitions in 2022.

Roma Tuimaunei, Alanna Brook and Toby Park (all Y9) represented Canterbury in the U13 Regional Tournament, with Roma's team winning the final. 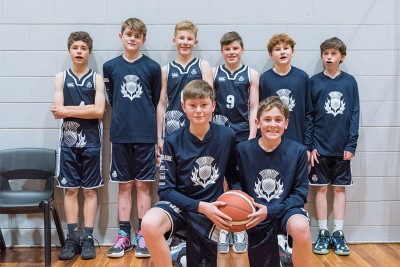 At the CPSSA Winter Tournament the St Andrew’s College Mixed hockey 6-aside team won the final 3–1 against Selwyn House School, finishing first out of 24 teams. The Preparatory A netball team finished third overall out of 32 teams.

Liam Randall (Y10) and Luca Rose (Y9) were part of a Christchurch combined team which won gold at the New Zealand Secondary Schools’ Canoe Polo Championships, with a 3–2 win over Havelock North High School. Both Liam and Luca contributed many goals throughout the tournament. 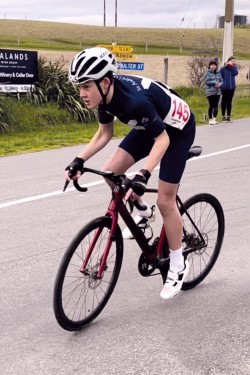 At New Zealand Schools’ Cycling three-day SKODA Southern Tour event for school cyclists, Cohnor Walsh (Y9) won the King of the Mountains title in the U15 grade, which was an accumulation of all the hill climbs throughout the tour. He finished fourth overall after the four races.

At the National Cyclocross Championships, Cooper Pringle (Y8) finished second in the U15 grade, and William Pringle (Y9) was fourth in the U17 grade. Both competed against much older boys. The brothers also competed at the South Island Secondary Schools’ Cyclocross Championships, where William was first in the U15 Boys’ category, and Cooper was second in the U14 Boys’ category. Cyclocross is an off-road cycling event that is a mixture between mountain biking and road cycling.

The Equestrian A team of captain Gemma Lewis, Sophie Thomas (both Y12), Lily Ellis (Y10) and Georgia Lewis (Y9) were second at the 2022 Canterbury One Day Horse Event.

The St Andrew’s Senior A Rocket League team of Edwin Short, Matthew Browne (both Y12), Joshua Blackman and Daniel Liu (both Y9) played well throughout the season and placed a respectable seventh in the South Island, Rocket League competition. 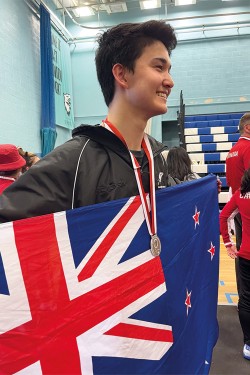 Ryan Stewart (Y13) was in the New Zealand Junior Men’s Epee team which won a silver medal at the Commonwealth Fencing Championship in London. In the Individual Junior event, Ryan placed 14th out of 60 fencers. Prior to this competition, Ryan competed at the Australian Junior Championships, where the New Zealand Junior Men’s Epee team won gold for the first time in 20 years. During the Term 3 holidays, Ryan won the National U20 Fencing Championships, and the Central Region Open Championship.

The following students were selected for regional squads for summer football:

Iona Lawson, Billie Revis (both Y11), Amelia McAllister and Kyra Lazor (both Y12) were a key part of the team which won the U16 Women’s South Island Football Championship hosted by Mainland Football. They were coached by Football Co-ordinator and Head Football Coach, Juan Chang, and ex-1st XI player Frankie Morrow (OC 2019).

Three students competed at the New Zealand Gymnastics Championships with the following results:

Jakarta Klebert, Hugh Nixon and Harry Withers (all Y13) were selected for the New Zealand U18 Junior Black Sticks Squad. 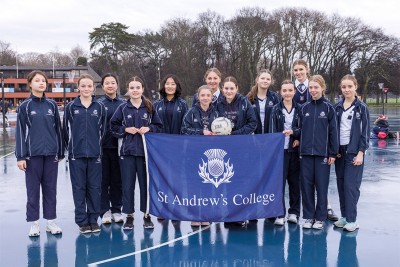 A group of 12 St Andrew’s College Preparatory School teams represented the College at the ISSA Winter Tournament. The Preparatory School A netball team and 1st XI football team won their competitions to qualify for the Canterbury Primary Schools’ Tournament, along with the Years 7–8 Mixed A 6-aside hockey team which finished second.

Scarlett Gray (Y10) was selected for the New Zealand team to compete at the Commonwealth Karate Championships in Birmingham where she was part of the Female Cadet (U16) team that beat South Africa in the final to claim the gold medal. Scarlett also competed in the New Zealand Secondary Schools’ Karate Competition, winning a gold medal in the U16 Female Kumite.

Sienna Stowers-Smith (Y12) was part of the national title winning Christchurch U18 Representative netball team. She was also named in the New Zealand Secondary Schools’ netball squad of 24, one of only three players from the South Island to be selected.

The Year 9A netball team put in an outstanding performance to finish second at the South Island Secondary Schools’ Junior Netball Tournament, losing the final to Columba College by just two goals.

Tom Turner (Y13) attended a polo development camp in Sydney as part of the New Zealand U21 team. They competed against the Australian national team, with Tom scoring all New Zealand team goals during the match. 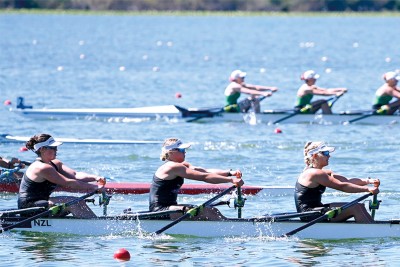 Georgia Thomson (Y13) represented New Zealand at the World Rowing Championships in Italy, where her crew qualified for the B final of the U19 Quadruple Sculls. In a hard-fought final, they came sixth, making the crew 12th in the world.

Cameron Blackwood and Thomas Ruwhiu (both Y13) were selected in the Junior Crusaders Squad for 2022.

Moses Armstrong-Ravula (Y13) was named as a member of the Hurricanes 2022 U18 Super Rugby Development Camp.

Thomas Swailes (Y12) was named in the North Canterbury U18 Invitational to play in four matches.

Metua Cranwell (Y9) was named as a reserve in the wider training squad for the New Zealand U14 Māori rugby league team. 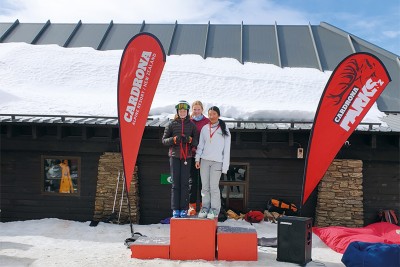 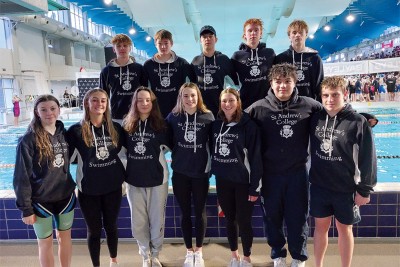 A team of 12 St Andrew’s swimmers competed at the New Zealand Secondary Schools’ National Swimming Championships, winning a total of 11 medals (including relays), with a further nine top 10 placings. Medal winners were:

Rakiatea Tau (Y11) and Amelie Clark (Y9) represented Canterbury at the National Scholastics Surf Championships. The Canterbury team was narrowly beaten by Auckland in the final, finishing in second place.

Billie Feaver-Banks (Y7) represented Canterbury at the U12 Tennis National Teams Event, which finished second overall after losing to Auckland in the final.

From the third Issue of Regulus in 2022.