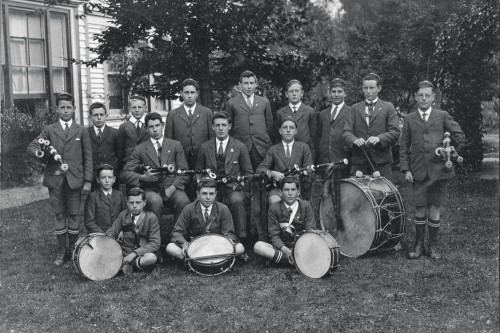 It seems extraordinary that a College pipe band, with an annual graduation from school of its most experienced members, has developed over a century to the best College pipe band in New Zealand, and also become Juvenile World Champions in 2013, and runners-up at the World Championships in 2018. “Everyone throughout the band’s history has contributed to these incredible achievements,” says Pipe Band Director, Richard Hawke.

The St Andrew’s College Pipe Band was established when boys at the College in 1919 sent a request to the first Rector, Sydney Dickinson. Pipe Major, James Erskine, of the Canterbury Caledonian Society Pipe Band volunteered as piping tutor for the 16 boys in the original band, which included drummer, Alistair (G.A.M.) Hilson, who would later have a significant impact on both the Pipe Band and St Andrew’s College.

The Pipe Band made its first public appearance at the College Sports Meeting in 1921, and in 1924, received its first kilts in the Fergusson tartan, chosen by the College's second Rector, A K Anderson in honour of Governor-General, Sir Charles Fergusson.

When hard economic times hit in the 1930s, and the future of the Pipe Band and St Andrew’s College itself was under threat, Alistair G.A.M. Hilson (fondly known as GAM) played a pivotal role in saving it. In 1933, he and Board member, George Morton Smith, organised a fair ‘to save the school from extinction’, rallying over 400 Old Boys to collect a massive amount of produce and sale items. A two day extravaganza over Founders’ Weekend saw the College books re-balanced, and GAM at just 26 years of age, immediately invited on to the College Board.

A number of former Pipe Band members enlisted to fight during the Second World War. By this time, GAM Hilson was the Pipe Band’s drill instructor, and he demanded a high standard of marching, dress, and discipline. In 1943, Bill Johnstone took over as piping tutor from Band Master Bill Fowler, who had been involved with the band for over 20 years. 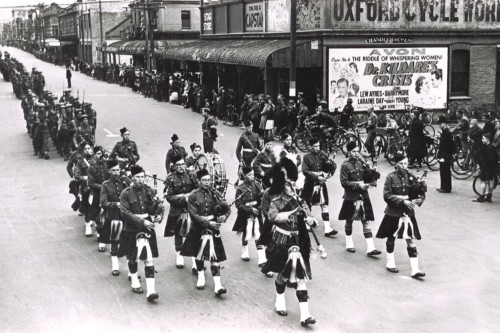 After the war the band took on a new focus to compete in the New Zealand Pipe Band Championships, and had its first major success in 1951 when, with GAM Hilson’s eldest son Paddy (OC 1952) as Pipe Major, the St Andrew’s College Pipe Band won the National B Grade. This achievement set the bar for generations of St Andrew’s College bands to come.

The band continued to prosper throughout the 1950s. During this period, Pipe Major Joe Patterson composed several tunes, including The St Andrew’s College March, and a tune in honour of GAM Hilson, which are both still played today.

In 1957, GAM’s son and former Pipe Major, Paddy Hilson, was tragically killed in a flying accident.

Pipe Major Bruce Richardson (OC 1966) distinguished himself as a solo piper in the 1960s, and led the band in a performance for the Queen Mother, who was in New Zealand on a royal visit.

In 1967, Old Collegian, Paul White, began his long stint as a piping instructor, and in 1969, the band celebrated its 50th anniversary. During these celebrations, was the opening of a new Band Room, along with the presentation of new uniforms and drums, all in memory of Richard Askin, the Pipe Major of the band in 1964, who just a few years after leaving the College was sadly killed in a motor accident.

In 1970, the band played for the Queen, Prince Charles and Princess Anne at the Canterbury A&P Show, and in 1971, six pipers played at the funeral of fourth Rector, Les Stewart. Pipe Major Greg Reynolds (OC 1973) won the B Grade National solo piping title in 1973, and became the first College piper to reach A Grade status while still at school. After 35 years’ dedication to the band, Bill Johnstone retired in 1979.

A two week tour of Australia in 1986 was the band’s first overseas trip, and the following year, it won Grade 3 at the National Pipe Band Championships, in Gordon Ogilvie’s last year as Band Master.

Alistair Duthie, Drum Major of the 1987 band, joined the Pipes and Drums of the 1st Battalion Black Watch in 1988, the first ever British Army Pipe Band, formed in 1739.

The 75th Jubilee of the band was celebrated in 1994, and 1996 will long be remembered for the band’s tremendous successes at competitions.

Barry Shaw retired as Band Master in 1999 with the role taken over by Chris Stevens.

History was made in 2002, when Kim Knight became the first female Pipe Major at St Andrew’s College, a year in which the band won the inaugural National Juvenile Grade Championship by a large margin. 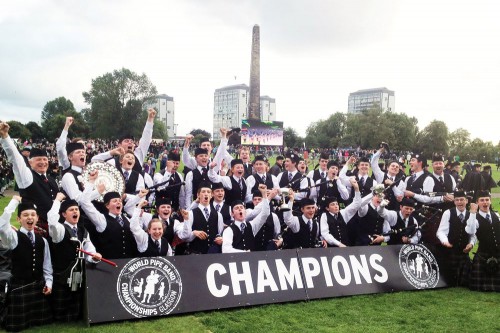 In 2005, Richard Hawke was appointed Pipe Band Director, beginning the modern and highly successful era in the Pipe Band’s history. James Laughlin arrived from Ireland the following year to take up the position as side drumming tutor.

Solo piping results since then have been unprecedented, with the band also consistently winning Grade 3 and Juvenile National titles. In 2007, the band made its first ever trip to Scotland to attend the World Championships, winning a remarkable third place in the Juvenile Grade. Early in 2009, the band won the New Zealand Grade 2 Open Championship, the only school band to get anywhere near this standard of performance.

The existing Pipe Band Room was damaged beyond repair in the 2011 earthquakes, and was replaced with a new Askin Pipe Band facility completed in 2014.

The year 2013 will be forever etched into the history books, after the band won the World Juvenile Pipe Band Championships in Glasgow, the first world championship won by any New Zealand Pipe Band, at any level. This was followed by the band’s second place at the World Championship in 2018, both outstanding achievements.

The skirl of the pipes continues to be an integral and special part of daily life at St Andrew’s College, with the Pipe Band performing at everything from assemblies and services, to sports fixtures, special events and occasions, and Prizegiving. The annual StAC Attack concert is another special highlight.

Throughout the Pipe Band’s 100 year history, the pipes and drums have evoked powerful emotions for all members of the St Andrew’s College community. The Centenary provided a fitting tribute to all who have been involved.